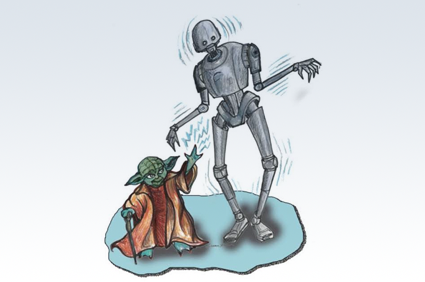 Recently a friend of mine — a philosophy professor who believes humans possess libertarian freedom — posted a question on social media directed to Christians. He asked: “If you had to choose between the two, would you rather be a Calvinist (compatibilist version) or an open theist?”

I quickly responded with the following:

“The ironic thing is that if Calvinism is equal to divine determinism (which is supported via the consequence argument), and it happens to be true, then no one would have the ability to genuinely choose between Calvinism or Open Theism. God would make those choices for us.”

My comment led to a lively debate with a Calvinist who disagreed. Perhaps I could have better worded my comment, but I went on to carefully clarify exactly what I meant. The Calvinist proceeded to assert that his specific “different shade” of compatibilism called, “semi-compatibilism” (hereafter, semi-c), allows for responsibility even if exhaustive divine determinism (EDD) is true (the view that God causally determines all things).

Semi-compatibilism differs from compatibilism in that it does not hold to the view that determinism is somehow compatible with free will, rather, the view argues that responsibility is compatible with determinism. Those who affirm this view, like John Martin Fischer, assert that agents can still be held responsible even if God or nature causally determines all things.

I contend that Calvinism (even of the semi-c variety) ultimately crumbles into hard causal determinism and genuine human responsibility melts away. That is to say, unless one modifies their exhaustive deterministic view in favor of a determinism of ONLY all physical events, and then allows for the libertarian freedom to think into the mix (but then it is no longer exhaustive divine determinism that we are discussing). Perhaps this should be called “semi-determinism” instead?

Semi-c Calvinists agree with libertarian “freedom fighters” that control is necessary to ground responsibility — even if one does not have the control to actually act or behave otherwise. Those affirming this view claim that there are two kinds of control that we must distinguish: Regulative Control and Guidance Control. Regulative control requires the ability to physically act otherwise, but guidance control does not. Guidance control is enough, they claim, to ground human responsibility even if all physical events are casually determined by God or nature.

I can see that this “guidance control” could sometimes allow for responsibility – but definitely not all the time and probably not most of the time — and if it does, we are not talking about *exhaustive* divine determinism (that God controls ALL things) but something else! Let me explain by first asking a question: Is one FREE in a libertarian sense to want to do X or not want to do X, even if they have no ability to do other than X?

Consider the droid, K-2SO, in the latest Star Wars flick in these different scenarios:

2- K-2SO was stolen against the droid’s will and reprogrammed with a new nature that will now always “choose”/act in accordance with the goals of the Rebellion (which are antithetical to the goals of the Empire). K-2 is even programmed by Cassian Andor to “like” his new programming. K-2 is not responsible for how he was re-programmed.

3- But suppose that somehow K-2 was able to transcend “his” programmed nature and began to “freely think” and freely choose to act on “his” own. If this is the case, then K-2 possesses libertarian free will (LFW) at least as far as thinking goes. Also suppose that Yoda senses a disturbance in the force and knows that K-2 has transcended his programming. Yoda now uses the force to manipulate all of the physical actions of K-2 to guarantee that these actions only approximate the Rebellion’s goals. (K-2 can think otherwise, but cannot act otherwise.)

4- Now suppose that although K-2 has somehow transcended his programmed nature and now possesses LFW to think freely — “he” also freely chooses to act in the exact same manner that Yoda just so happens to be forcing K-2 to act.

This is an example of what semi-compatibilists call “guidance control.” The agent makes free thinking decisions that just so happen to coincide with the only way physical actions could be. However, it is vital to notice that this is not exhaustive determinism as K-2’s thoughts were not causally determined (K-2 was the source of “his” thinking)!

In this sense I concede that K-2 should be held responsible and is worthy of praise for “his” good actions. This is the case because the droid has libertarian freedom to think and freely chose to act in the only manner that “he” physically could act (although K-2 did not know he could not do otherwise). K-2’s actions were genuinely “up to him” and “he” wanted to act in the exact same manner as “he” did act — although K-2 had no ability to act or move otherwise — Yoda made sure of that much.

But the question is raised: did K-2 have the ability to at least “think” or “want” otherwise? That is the BIG question — and the one the Freethinking Argument is based! Consider the next scenario:

In this scenario, who is responsible for all the good K-2 is doing for the Rebellion? Surely K-2 is not to be praised — Yoda is responsible.

The only time the droid was really responsible for “his” actions was when “he” somehow transcended “his” programmed nature and freely chose to act in accordance with the way Yoda was forcing “him” to act anyway. He possessed FREE thinking (in a libertarian sense) in this instance and had so-called, “guidance control.” All other examples demonstrate that either whoever programmed K-2 last was responsible for his actions or Yoda was responsible for the droid’s actions.

In the last scenario offered above (5), the droid still possessed libertarian free will to *think* otherwise but not to *act* otherwise. It is vital to distinguish between the two. However, in this scenario exhaustive determinism is false because one is free in the libertarian sense to think otherwise. This is why I contend that the Consequence Argument (and versions of it) demonstrates that compatibilism and even semi-compatibilism do not allow for free will or responsibility if all is determined exhaustively. It is nothing but word games if one asserts otherwise.

I made this clear in my article, “Rogue One: A Lesson About Free Will & Responsibility.”

It seems to me that the only way for the Calvinist to find some “elbow room” for compatibilism or semi-compatibilism (while avoiding the implications of the consequence argument), is to deny exhaustive divine determinism and incorporate some limited libertarian freedom (at least some of the time) when it comes to thinking. But then we are no longer discussing exhaustive divine determinism as the thoughts of agents would still be free in a libertarian sense, even if their actions were not. Again, this would not be determinism of all things, but rather, “semi-determinism.”

One prominent philosopher had this to say regarding my case:

I agree with you essentially. Guidance control without regulative control does not allow for alternate possibilities. It may be question begging to say we do not make “genuine choices” but certainly we are not the “source” of those choices in a way that gives us control to choose differently. And our “responsibility” in this case seems even more diminished if an intelligent agent (God) is purposely determining things so we “guide” things exactly as we do. Or so it seems to me.

Here is the bottom line: I argue that on any view of *exhaustive* causal divine determinism (which includes all thoughts, actions, beliefs, and behaviors), humans are no different than droids and are not genuinely responsible for our thoughts, actions, beliefs, or behaviors. Thus, it follows that if exhaustive divine determinism is true, then it is not genuinely “up to us” what we think or believe. It is not “up to” people to choose between being a Calvinist, Open Theist, or even an atheist! If God causally determines all things, then all things — including all thoughts and beliefs — are also exhaustively causally determined by God.

Compatibilism is problematic for both atheistic and Calvinistic compatibilists; however, it is even worse for the Calvinist. If God is ultimately responsible for the “programmed nature” of humanity, then those who suffer into the infinite future of eternity in the tortures of hell are being punished for thoughts, actions, beliefs, and behaviors that were not really “up to” them. The damned are not responsible. God is the puppet master (or “droid programmer”) on this view.

This is good reason to freely choose to reject any view of exhaustive divine determinism!

The problem many compatibilists make is found in that they are so focused on the ability to DO otherwise, that they forget about the ability to THINK otherwise. Are all of our thoughts causally determined by something or someone else? If so, “guidance control” is not ultimately under our control — God determines how we want to guide our actions. However, if our thoughts are actually free in a libertarian sense (and we are really free thinkers), then exhaustive determinism is false.