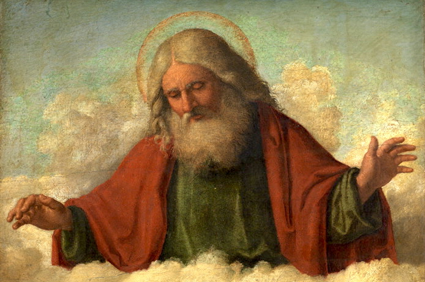 “LORD”, the psalmist declares, “thou hast been our dwelling place in all generations. Before the mountains were brought forth, or ever thou hadst formed the earth and the world, from everlasting to everlasting thou art God. Thou turnest man back to the dust, and sayest, Turn back, O children of men! For a thousand years in thy sight are but as yesterday when it is past, or as a watch in the night” (Ps. 90:1-4). Here the psalmist confirms the familiar idea of God’s everlasting duration from eternity past into eternity future. But while passages involving God’s eternity are familiar, perhaps even commonplace to those of us who are Christians, it still deserves recognition that there are non-Christians who fail to grasp our worldview at the comprehensional level.

In particular, confusion is often evidenced in the form of the question ‘Who created God?’. This question is often presented by non-theists as a sort of conversation stopper, intended to demonstrate that the theistic account of something is explanatorily inadequate in some way. However, the question itself betrays a lack of understanding of what Christian’s mean by “God”. For if God is past eternal, as the Psalmist declares, then He couldn’t, by definition, have been created. Given this, the question of ‘Who Created God’ is therefore an incoherent one, akin to asking ‘What created the uncreated creator?’.[1]

Moreover, if the question arises within the context of the unbeliever (erroneously) thinking that God must have been self-created (an incoherent notion)[2] since God is said to be the creator of all things, the theist can clarify that the domain of all things of which God is creator which he/she means to refer to only includes created reality.

Furthermore, notice that the grammatical shift from saying that God is the creator of all things to now saying that He is only responsible for created reality isn’t a contrived move either. One is not changing their view about God in light of the gripes of the unbeliever, rather the Christian is merely providing a more philosophically nuanced account of their view.[3]

Who Created God? – The Question In the Context Of The Kalam Cosmological Argument
Also deserving of our attention is the relevant question when it is raised within the context of natural theology. For the question of “Who created God?” is typically not raised in a vacuum, divorced from one having given an argument for God’s existence. Within the context of the Kalam Cosmological Argument, for example, the question, when it is given in response to the arguments first premise, usually presents itself as “If everything that exists requires a cause, then why doesn’t God?”. The question, in its present form, however, simply misrepresents the argument’s first premise. The kalam cosmological argument, in its most traditional forms, does not state that everything that exists has a cause, rather it says that ‘Everything that begins to exist has a cause’.[4] But, if something is eternal, then clearly, it cannot have a cause which brought it in to being because there was never a moment in which that thing didn’t exist.

And notice that for the proponent of the Kalam Argument to further suggest that the universe had a beginning, but that God didn’t isn’t special pleading for God. The argument in question doesn’t just arbitrarily stipulate the duration of the relevant entities, rather, this is one of the many points that the argument sets out to prove.

Who Created God? – The Question In The Context of the Teleological Argument
Within the context of the Teleological Argument, Richard Dawkins has objected to it in that he believes that “the attribution of design to a designer . . . immediately raises the larger problem of who designed the designer”.[5] This question, however, founders in so far as it assumes that in order to recognize that an inference, or more narrowly, a design inference is the best explanation, that one must also have an explanation of the explanation.

As philosopher William Lane Craig explains, “If archaeologists digging in the earth were to discover things looking like arrowheads and hatchet heads and pottery shards, they would be justified in inferring that these artifacts are not the chance result of sedimentation and metamorphosis, but products of some unknown group of people, even though they had no explanation of who these people were or where they came from. Similarly, if astronauts were to come upon a pile of machinery on the back side of the moon, they would be justified in inferring that it was the product of intelligent, extra-terrestrial agents, even if they had no idea whatsoever who these extra-terrestrial agents were or how they got there.”[6, 7]

Commenting on the inadequacy of Dawkins’ appraisal of explanation, Gregory Dawes, an atheist philosopher of science responds, “Many of our most successful explanations raise new puzzles and present us with new questions to be answered.”[10] The question of whether one can offer an explanation of the intelligent designer can therefore be left an unanswered question, left to future investigation.[11]

Who Created God? – Conclusion
In sum, the question of who created God, in the various contexts in which we have addressed it unequivocally arises out of a failure to understand certain rudimentary concepts and principles. The question, in its most basic form, divorced from the project of natural theology, is simply raised out of comprehensional ignorance, while, within the context of certain arguments for God’s existence, it is raised out of both comprehensional ignorance and a failure to understand the philosophy of science.

That said, if the motivation behind the relevant question is for the atheist to try to undercut or rebut the adequacy of a particular conception of God, more appropriate questions to ask would be those such as, “Why think God exists?”, or “Why think God exists in the way Christians conceive of Him?”. Alternatively, the atheist could even offer an argument in favor of why they think God cannot exist in the way He is traditionally conceived of being. Recall that, in raising the question of who created God, atheists are typically seeking to challenge the explanatoral adequacy of the God hypothesis, if that endeavor is intended to yield a fruitful conversation amongst informed persons, that is simply more likely to occur as a result of a well thought out argument or query rather than a single, misguided, ignorant question.

[1] Further, the question becomes doubly incoherent in light of God’s metaphysical necessity. Given this property, God, if He exists, is not merely an eternal entity which just so happens to exist in this particular set of circumstances, rather, He exists eternally in all possible worlds and therefore couldn’t have had a creator, even in principle.

[2] It is an incoherent notion since in order for God to have been self-created, He would have had to create Himself while not existing, thereby pre-existing His own existence, which is self-contradictory.

[3] To clarify the point, imagine you were to comment that “there’s nothing in the fridge”. Upon hearing that remark, your friend responds to you by saying “Ha, there exists air, shelves, and fundamental particles inside of it!”. In response to this, you then go on to clarify that your initial comment was in reference to there being any food inside of the refrigerator. Now, clearly, your friends remark here was completely wrong-headed. This is because we recognize that your initial comment was intended to be understood informally, lacking in technical precision. It would therefore simply be unsympathetic of your friend to insist, in light of your clarifying statement, that you were simply attempting to rationalize your initial comment. Similarly, the atheist  needs to respect the fact that when Christian’s typically make statements like ‘God is the creator of everything’, that they are speaking colloquially and that it is simply no part of orthodox Christian belief to think that God is self-caused.

[4] In fact, if the atheist were to go on to arrogate that everything that exists requires a cause, in response to the Kalam Cosmological Argument, then this would beg the question against theism since it would assume that eternal entities, like God, don’t exist. In contrast, the premise ‘Whatever begins to exist has a cause’ is completely neutral on the question as to whether or not eternal entities exist.

[7] One could try to circumvent the first illustration by saying that we can infer an unknown designer for these artifacts because of our prior familiarity with the production of such artifacts by human beings. However, Craig had the prescience to forestall this objection by giving the second illustration involving astronauts discovering machinery on the back side of the moon. Craig has gone on to explain that these astronauts know that only the United States has successfully carried out moon landings and that we didn’t leave that stuff there. Further, we might not have even the slightest idea as to the function of these devices. Notwithstanding, although such machinery is not the product of familiar human intelligent design, it is still clearly the product of intelligent design. (Craig, “Design Inferences and Familiarity,” https://www.reasonablefaith.org/writings/question-answer/design-inferences-and-familiarity)

[9] Notice that this isn’t an argument against the possibility of an infinite regress, rather it’s an argument against the formation of an actual infinite by successive addition. With each explanation in the infinite chain of explanations successively accounted for by us, there would always be another explanation that we would first have to explain for before reaching the ever-elusive “infinitieth” explanation. So it would simply be impossible to provide an infinite number of explanations. For further reading, see William Lane Craig, “The Kalam Cosmological Argument”, pp. 102-110.

[11] In any case, the theist can provide an explanation for God’s existence, namely, that He is metaphysically necessary and therefore does not require an external cause. The theist could then provide arguments in favor of thinking that God exists in this way such as the Contingency and Modal Ontological Argument.