The Great Commission — what is it? Any Christian worth their salt can quickly tell you about the Great Commission and can share the corresponding chapter and verses at the end of the Gospel of Matthew. Indeed, this single passage is often referenced when defining an “evangelical Christian.”

There are a couple reasons why so much emphasis is placed on this short passage of Scripture. Not only is the Great Commission the last recorded personal instruction given by Jesus to His disciples, it is also a specific command from Jesus Christ to all His followers — those who would call themselves “Christian” — to take specific action while on this earth. Indeed, these are the last commands of Christ:

18 Then Jesus came to them and said, “All authority in heaven and on earth has been given to me. 19 Therefore go and make disciples of all nations, baptizing them in the name of the Father and of the Son and of the Holy Spirit. . .

Evangelical Christians are quick to affirm that we ought to tell people about Jesus, share the Good News, and baptize new believers as a symbol of their commitment to Jesus. Sadly, however, many of these same Christians do not seem to be aware of the entire Great Commission. In fact, many so-called “Christians” today do not think the final commands of Jesus are “great” at all.

Consider the next recorded words of Jesus:

20 and teaching them to obey everything I have commanded you.

The words “everything I have commanded” is known as the Law of Christ. The word “obey” implies that all nations and all people ought to follow the commands of Jesus. Now, the two greatest commands of Jesus seem to be those most would endorse. Consider a summary of Matthew 5 and 22:

2- Love everybody (from your neighbors to those who consider you an enemy).

Jesus hammered his second command home by offering the parable of the Good Samaritan (Luke 10:25-37) as an example of how humans ought to make sure an individual of a different “people group” thrives and flourishes.

It seems odd that anyone would object to Jesus’ two “greatest commands.” Atheists have even told me that we ought to follow those specific teachings of Christ. The problem, however, is that Jesus not only commanded us to love each other, He also issued many more instructions as to how we ought to specifically love God and our fellow man. It is these specific teachings that seem to “separate the sheep from the goats” (to use Jesus’ own words).

The Law of Christ

Regarding the Law of Christ, historian (and agnostic) Tom Holland says:

Indeed, the same Law of Christ that was appealed to in order to fight against slavery and for women’s rights, is also the same Law that is used to condemn abortion and the LGBTQ agenda today. Interestingly, we are told today — from groups like Black Lives Matter (BLM) — that we ought to fundamentally transform America in the fight against racism by “divesting ourselves from whiteness.”[1]

When someone tells me to divest myself of whiteness, I immediately respond with one of Greg Koukl’s “tactics”: “What do you mean by that?”

A common response is that I must divest myself from whiteness by doing things such as reading “White Fragility” (see the FTM review here) and affirming the mission of Black Lives Matter (BLM the organization). However, it does not take long to see that the mission statement of BLM is antithetically opposed to the Law of Christ. For example: The Law of Christ opposes murder (which includes killing babies for convenience); BLM supports the killing of little humans — an overwhelming majority of which are black babies (apparently not ALL black lives matter according to Black Lives Matter). The Law of Christ is clear that homosexuality is opposed to God’s creative intent and design plan. BLM, however, promotes the LGBTQ agenda. The Law of Christ also clarifies that the traditional “nuclear family” (a female and a male raising children together) is God’s intent and design plan for the family structure (Mark 10:6-8). BLM, however, opposes the biblical model of the nuclear family.

Indeed, it seems to be the case that Black Lives Matter (the organization) and many other voices in culture today, are telling us that if we want to be a “woke anti-racist” who has “divested ourselves from whiteness,” then we must oppose Jesus Christ and what He said, taught, and exemplified. As noted elsewhere:

Indeed, James Lindsay notes why it seems to be impossible to have a logical or reasonable conversation with a “woke social justice warrior”:

“Debate and conversation, especially when they rely upon reason, rationality, science, evidence, epistemic adequacy, and other Enlightenment-based tools of persuasion are the very thing they think produced injustice in the world in the first place. Those are not their methods and they reject them.”

Recently a young woman describing herself as a teacher, Ph.D. student, and “social justice change agent,” tweeted the following:

“The idea of 2+2 equaling 4 is cultural,” a product of “western imperialism/colonialism” [that’s another way of saying “the product of old white males”].

From Math to Morality

If mathematics — held up as the most objective of disciplines — is being attacked by Marxists with the sword of critical race theory (CRT), then the heads of self-avowed Christians who affirm objective moral standards are sure to be next on the chopping block. This is the case, because based on the methodology of CRT employed by BLM (as surveyed above), it follows that Jesus is racist.

So much for the “Great Commission.” Apparently, according to the new woke mob, the teachings of Jesus are racist too. This means the morality taught by Jesus is “racist” (this explains the recent “Bible burning bashes” in Portland).

To those who refer to yourselves as Christ-followers (Christians), you have a choice to make. You can be woke, or you can be born again (as Jesus taught in John 3:3). These two concepts are antithetically opposed to each other. You can oppose the dogma of BLM, or you can oppose the Creator of the universe.  Although many of “the elect” will be deceived (Matt 24:24), you can choose to take your thoughts captive (2 Cor 10:5), before they take you (Col 2:8). Choose wisely.

Bottom line: If following the Great Commission and all that Jesus commanded makes one a racist, then call me a racist! However, if you believe racism is objectively wrong (like I do), then you should be a Christian.

[1] “Whiteness” in today’s culture is defined in the following manner: “The way that white people, their customs, culture, and beliefs operate as the standard by which all other groups of are compared.” 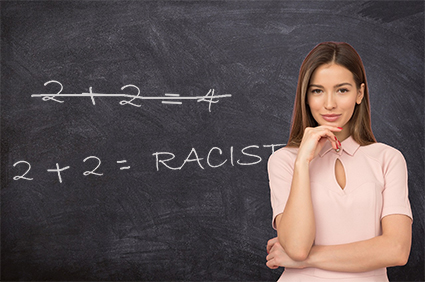