Scientists are valuable friends. As a philosophically inclined theologian I appreciate my colleagues who have immediate access to important scientific data in physics, chemistry, biology, and more. Mad scientists, on the other hand, I typically try to avoid! Be that as it may, these mad scientists, while scary, are often quite helpful when conducting important thought experiments.

It is commonly asserted that something known as Frankfurt Experiments prove that the libertarian freedom to “do otherwise” is not needed for moral responsibility. Although it seems intuitive that one must possess the ability to behave otherwise in order to be held morally responsible for his or her actions, the Frankfurtian counters this intuition by offering some clever thought experiments typically featuring a mad scientist (most likely from Russia) interfering with an American election.

These kinds of thought experiments demonstrate that although the voter had no ability to vote for anyone other than Obama, he was still responsible for this decision to vote for Obama. Why? Because it was his choice. It was “up to” him, even though he could not do, act, behave, or vote otherwise. Frankfurt seems successful demonstrating that an ability to do otherwise is not always essential for responsibility. At this point, many determinists “drop their microphones” at the feet of the libertarian freedom fighter and exclaim: “GAME OVER!”

But not so fast!

What if we run this thought experiment the other way? Suppose the voter, after deliberating for whom to vote, decides to press the red button casting a vote for Romney. The mad scientist has access to the voter’s brain and the moment before the voter pushes the red button to vote Republican, the mad scientist sees what is about to happen and activates the electrodes in the voter’s brain to make the man’s finger hit the blue button to vote Democrat. The man, although intending to vote for Romney, casts a vote for the Democrat and Obama wins the election by one single vote (pesky Russians)!

Now, even in the original scenario, where the voter could not vote other than for Obama and Obama alone, it does not follow that the voter did not possess libertarian free will. Namely, the libertarian freedom to think or think otherwise. This is the case because it seems that this famous Frankfurt Experiment still assumes the libertarian ability to be a free thinker![1] It was only after the voter deliberated (thought freely) regarding for whom he should cast his vote, that the mad scientist decides whether to step in and rig the election or not.

Let’s invite the mad scientist back to the lab to reach a stronger conclusion:

Question: How can the voter (not the mad scientist) rationally affirm the current thoughts and/or beliefs in his head as good, bad, better, the best, true, or probably true without begging the question? It would be impossible — he cannot do such a thing! It is clear that although both scenarios do not allow for the voter to vote otherwise, the voter is not responsible when the mad scientist overrides his actions that would follow from his free thinking, or when the mad scientist takes total control of all the man’s thinking.

The mad scientist thought experiment demonstrates the importance of libertarian freedom.[2] If one is really to be held responsible, then their thoughts — and any action that follows from a certain thought — must not be causally determined via external sources like physics, God, or mad scientists. The libertarian ability to be a free thinker is essential for moral and/or rational responsibility. 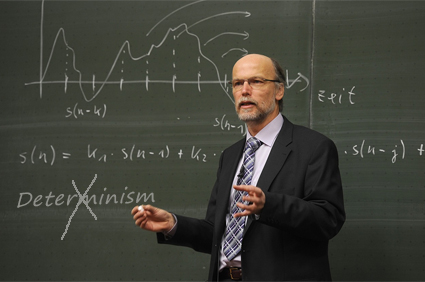