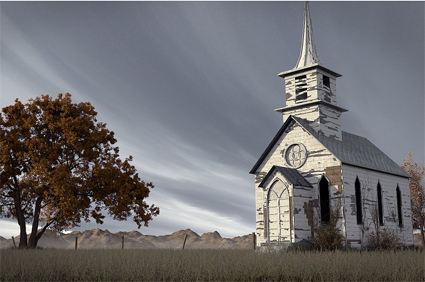 I love the Evangelical Free Church of America! I was born and raised in this denomination and I was a pastor in the EFCA for nearly a decade. I am no longer employed as a pastor, but I continue to be actively involved in the local church and although I seek to serve a number of churches, Kearney Evangelical Free Church officially recognize me as the “Apologist in Residence.”

One reason I like the EFCA is because of their Statement of Faith. The EFCA prides itself in “majoring on the majors while minoring on the minors.” While some theological beliefs are clearly not allowed for pastors or members to hold in the “major” category, the Church’s Statement of Faith allows for many different beliefs in the “minor” category to be held. Disagreement and debate on several issues is common, but it makes for some fantastic staff meetings!

For example, it is not uncommon to have young earth creationists and theistic evolutionists in the same congregation. Everyone agrees that God created the universe but differences of opinion pertain as to HOW God created or the “timing” of events. Everyone agrees that the Bible is the inspired Word of God, but differences of opinion regard HOW to properly interpret the Bible (hermeneutics). And while the EFCA takes a hard stance on the return of Christ taking place prior to the Millennium (I agree but think this is an unnecessary “hard stance”), the church is often divided as to exactly when Jesus will return: pre, mid, or post Tribulation. It is also common to find major disagreements among pastors regarding the issue of God’s sovereignty and human responsibility.

Although the EFCA has Arminian roots[1], the “Free church” I grew up in seemed to reject the idea that humans possessed libertarian free will. In fact, ALL of the pastors I knew growing up — not to mention the majority of the large church staff I was a part of — were committed Calvinists who affirmed determinism! In fact, as I have discussed elsewhere, I was a committed determinist for many years and while I was on staff in the EFCA, while surrounded by fellow Calvinists, I eventually changed my mind and became a Molinist.

The Process of Changing My Mind

This “conversion” was not quick and easy. I studied this issue every day for over a year before making my decision to affirm Molinism. I studied the whole of Scripture (cover to cover) while being careful not to take certain “proof texts” out of context; I studied hermeneutics and how to determine the most probable and “best” interpretation of ancient texts while doing my best to obtain the original author’s intent. I also engaged in the philosophy of theology quite seriously and devoted myself to thinking logically about a maximally great and perfect God. After all, if Christianity is true, it will always be logically coherent because truth and logic are inextricably linked (you cannot have one without the other). Finally, since I was a pastor in the EFCA, I examined their Statement of Faith quite carefully. I wanted to make sure Molina’s views were compatible with the church in which I was a pastor.

After freely choosing to engage in this long and intense study, I was eventually persuaded and chose to affirm libertarian freedom in the Evangelical FREE Church of America! I was convinced that Molinism was compatible with the Statement of Faith and chose to make my views public. This initially caused a few waves but has since led to many fantastic conversations with my brothers and sisters in the EFCA. In fact, as a result of these conversations, I am seeing more and more people — including pastors — in my denomination affirming Molinism.

It has been a few years since I was regularly examining the EFCA’s Statement of Faith with a fine-toothed comb, however, I recently decided to take another look at it. I was shocked to see what had been right under my nose for years, but I did not make the connection at the time: Molinism seems to be the only view that makes sense of the first declaration of the Statement of Faith.

1. We believe in one God, Creator of all things, holy, infinitely perfect, and eternally existing in a loving unity of three equally divine Persons: the Father, the Son and the Holy Spirit. Having limitless knowledge and sovereign power, God has graciously purposed from eternity to redeem a people for Himself and to make all things new for His own glory.

The first sentence is non-controversial for the vast majority of Christians; however, it is important to note that the EFCA is affirming perfect being theology and the definition of God as a “Maximally Great Being” based on the two words “infinitely perfect” (Psalm 18:30). The second sentence, however, draws a clear line in the sand and segregates certain theological beliefs from the denomination. Namely, Open Theism. Adrian Boykin (Lead Pastor of Kearney Evangelical Free Church) clarifies:

“This statement was aimed as a refutation of Open Theism. The EFCA prides itself on not dividing on the Calvinism/Arminianism/Molinism debate, and admirably lives out the 4th century plea: In essentials unity, in not essentials liberty, in all things charity. . . The EFCA statement. . . does not seek to specifically align with Calvinism/Arminianism/Molinism per say. Rather, it speaks of God’s limitless knowledge in order to close the door on teaching Open Theism.”

Open theism is a view that God does not — or cannot — possess perfect knowledge of future events or knowledge of counterfactuals of creaturely freedom in possible worlds logically prior to His creative decree (from eternity past). The EFCA, however, does not allow one who affirms Open Theism to be an ordained or credentialed pastor as they deny the “limitless knowledge” affirmed in the Statement of Faith. After all, Open Theists affirm there are some propositions that God simply does not know if they are true or false (thus, God’s knowledge is “limited”).

It is important to note that many Open Theists would be quick to argue and defend their view. The scope of this article, however, is not to argue against Open Theism. What is vital to grasp is that by using the words “limitless knowledge” in an attempt to refute Open Theism, and by combining it with the words “sovereign power,” and “graciously purposed from eternity,” seems to exclude all views except for Molinism from the EFCA.

If God’s knowledge is indeed, “limitless” then this would include knowledge of counterfactuals (which the Bible clearly affirms: 1 Samuel 23:6-14; Jeremiah 38:17-18; Deuteronomy 18:22; etc…). If God “always” possesses perfect and limitless counterfactual knowledge, then this includes everything that God knows logically prior to His creative decree or “before the foundations of the world” as the Apostle Paul describes in Ephesians 1:4. If this is the case, then God possesses middle knowledge.

The phrase “limitless knowledge” along with “purposed from eternity” really struck me. This is because Molinism affirms that God possesses limitless knowledge from eternity past. That is to say, God knows the truth-value to every proposition — including counterfactual propositions — without beginning. He never gains “new” propositional knowledge. So, with middle knowledge in mind, God can create a world in which He knows how humans would freely choose. This perfectly explains how God can possess both “limitless knowledge and sovereign power,” and “purposed from eternity” all things that will occur — even everything that He does not causally determine to occur. This would include the libertarian freedom humans possess allowing us to think, act, believe, and behave responsibly.

Why God Allows All Kinds of Bad Stuff: A 4-Step Response