With the release of Star Wars: The Rise of Skywalker, the “Skywalker Saga” is officially complete (for better or worse), and we can now examine all nine episodes as a completed whole. (Spoilers ahead!)

While all of the Star Wars movies carry similar themes, such as hope, the importance of family, and the ultimate triumph of good over evil, I think there is one concept that rises above the rest: redemption.

Quickly defined, redemption is the act of making up for one’s past wrongs. The greater the wrongs committed, the greater the necessary actions to atone for one’s past. Redemption usually (always?) involves some sort of sacrifice, and so sacrifice and redemption are closely linked. The two greatest examples of this in the Skywalker Saga involve Darth Vader and Kylo Ren:

Darth Vader is the shining example of redemption in the original Star Wars trilogy. In spite of  the great evils that Vader has committed, his son, Luke Skywalker, believes that there is still good within his father, and that Vader could be turned back to the Light.

At the end of Return of the Jedi, Luke rejects the Emperor’s temptation and refuses to kill Vader, so the Emperor decides to kill Luke instead. Witnessing the suffering of his son, Vader rescues Luke, throwing the Emperor to his death (or so we think!). The injuries sustained by Vader are fatal, but he still has the opportunity to thank his son for not giving up on him. As a sign of Vader’s ultimate redemption, he appears as a Force Ghost at the end of the film as his unfallen self, Anakin Skywalker, alongside his—and his son’s—former teachers, Obi-Wan Kenobi and Yoda.

Kylo Ren’s redemption story was a major arc of the sequel trilogy. Like his grandfather, Darth Vader, Ren was guilty of many wrongdoings, his worst (especially to us fans!) being killing his father, Han Solo, in The Force Awakens. Ren believes this action would fully push him over to the Dark Side; instead, it brings him massive guilt and inner turmoil. He wants to fully embrace the darkness, but the light within him does not allow that.

In The Rise of Skywalker, Rey mortally wounds Ren, but in an act of grace and mercy, she heals him. This—along with a vision of his dead father—brings Ben Solo back from the darkness to the light. Ben then travels to Exegol to help Rey defeat Palpatine (once and for all!). But his true act of redemption is when he gives his life to bring Rey back from the dead.

In these cases of redemption within the Star Wars universe, we see how characters sacrifice themselves to atone for their past evil actions. But while Vader’s and Ren’s sacrifices complete their turns from darkness to the light, does that truly make up for all of the evils they committed? Probably not. And it is the same for us.

There is no amount of good deeds that will erase our sins and make us right in God’s eyes. But that doesn’t mean there is no hope for us. As noted earlier, sacrifice and redemption are connected. But it is not our own sacrifices that redeem us:

“In [Jesus] we have redemption through his blood, the forgiveness of sins” (Eph. 1:7).

Jesus’ sacrifice on the cross is what grants us redemption and forgiveness for all our sins – no matter how many or how terrible. Vader and Ren believed they were too far gone into the Dark Side of the Force, and yet they found their way back to the Light.

Likewise, there is absolutely nothing that can separate us from God’s love (Rom. 8:38-39). But while none of our own actions can save us, we can be redeemed by Jesus’ sacrifice. 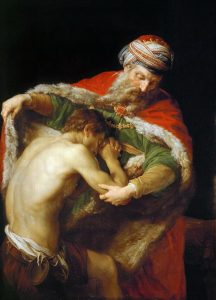 As satisfying as it was to see Emperor Palpatine meet his demise at the end of Return of the Jedi, and then ultimately in The Rise of Skywalker, I was far more pleased to watch Vader and Ren turn from the darkness back to the light. God feels the same way about us:

“Do I take any pleasure in the death of the wicked? declares the Sovereign Lord. Rather, am I not pleased when they turn from their ways and live?” (Ezek. 18:23)

Many people may view God as an angry old man in the sky, waiting for us to mess up so he can smite us and condemn us to hell. But as we see from the verse above, this cannot be farther from the truth.

God desires us to repent of our wrongdoing and to choose life. Like the parable of the lost son (Luke 15:11-32), God is waiting for us to return to him and will welcome us with open arms. He is desperate to save us from the darkness and bring us to the light:

“[The Father] has qualified you to share in the inheritance of his holy people in the kingdom of light. For he has rescued us from the dominion of darkness and brought us into the kingdom of the Son he loves, in whom we have redemption, the forgiveness of sins” (Col. 1:12-14, emphasis mine).

For more thoughts on Star Wars: The Rise of Skywalker, see:

5 Reasons the Force Is Strong with the Rise of Skywalker December 31, 2019