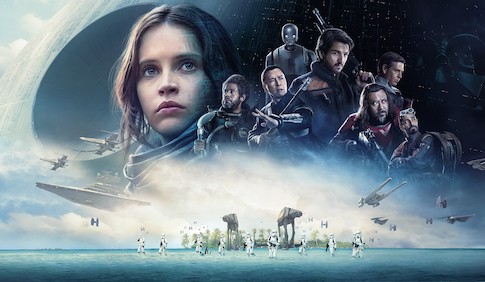 This article contains spoilers for Rogue One: A Star Wars Story. You’ve been warned.

The obvious theme of Rogue One is hope. Many characters repeated the phrase “Rebellions are built on hope.” Hope is the last word uttered in the film. The events in this movie directly lead into the original Star Wars film (1977), which now is entitled A New Hope.

It’s the perfect subject for a movie released in the Christmas season. The theme of the first Sunday of Advent is hope. Hope is a key Christian virtue. Jesus came to bring hope to the world. Hope is a component of faith (Hebrews 11:1). Paul tells us that suffering produces perseverance which produces character and then results in hope (Romans 5:3-4).

But I sure didn’t feel hopeful after watching Rogue One. My initial reaction once the credits started rolling was “Everyone dies!”

Not just the main bad guy either. All of the good guys die too. The main protagonist Jyn Erso dies. She witnesses her mother die as a child and her father perish just as she discovers him after many years apart. Saw Gerrera, the man who saved her life and raised her, dies shortly after she is reunited with him as well. The entire Rogue One crew? Dead. Even the sassy robot, K-2SO, heroically offers his “life” to protect his friends. And those poor Rebel soldiers who tried to protect the Death Star plans from Darth Vader….

How can a movie about hope feature so much death?

Likewise, death has clouded this holiday season. My grandmother passed away on December 20. Star Wars’ Princess Leia, Carrie Fisher, died December 27. Many others I know also lost a loved one, the most tragic being a couple who lost their newborn. At Christmastime we celebrate the birth of Christ. What could possibly be more antithetical to that than the death of a little baby?

And yet, there’s hope.

When King David’s newborn child died, he responded “I will go to him,” a recognition that when he died, he would be reunited with his son (2 Samuel 12:23). Some day I will see my grandmother again. We Christians have hope that we will meet all of those dead in Christ  at the final resurrection and enjoy eternal life together.

This is what distinguishes Christian Hope (which I will capitalize) from the ordinary use of the word hope. Typically, hope is a feeling. A desire or longing for things to be better. The Rogue One crew were motivated by the hope that their actions would eventually topple the Empire and bring freedom to the galaxy, even at the cost of their own lives.

But that hope was not a guarantee. The Rogues didn’t know if their mission would succeed as so many things could have gone wrong. Would the Death Star plans eventually reach the Rebellion or would their lives be sacrificed in vain? This is the key distinction from Hope.

Christian Hope is not wishing or desiring things to be better. It is the assurance that Christ defeated death through his crucifixion and resurrection. We do not have mere hope for the future. We have certain Hope. The way we know that a cold, harsh winter will eventually be broken by the warmth of spring. That is the Hope we have in Christ.

We celebrate Christmas for the birth of Christ, but he came to be sacrificed for our sins. His death gives us life and Hope. So even as a movie about hope can be suffused with death, so can a Christmas season, or any season, darkened by death be brightened by Hope.

“Brothers and sisters, we do not want you to be uninformed about those who sleep in death, so that you do not grieve like the rest of mankind, who have no hope. For we believe that Jesus died and rose again, and so we believe that God will bring with Jesus those who have fallen asleep in him.” – 1 Thessalonians‬ ‭4:13-14‬