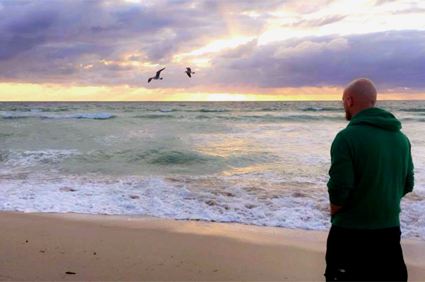 Recall the most beautiful landscape you have ever witnessed. Think about how you felt a need to take an extra moment (or several) to stare at the scene as to sear it into your memory — almost as if it were the right thing to do. Does it not seem wrong to ignore such magnificence?

In a recent Reasonable Faith podcast, William Lane Craig was asked if it is possible to argue for the existence of God based on objective beauty in such a way that would be similar to one of my favorite arguments — the argument from objective morality. Craig responded by saying that he “hopes so,” and would like to see someone make the argument that God grounds objective aesthetic values. However, he added that he is not sure how such a syllogism would be formulated.

I took Craig’s remarks as a friendly challenge. And after recently spending time on beaches in California, Miami, and the Virgin Islands, as well as spending several days in the Rocky Mountains in Colorado (not to mention viewing many sensational summer sunsets over the plains in Nebraska), I have been thinking about God’s creation and how to properly enjoy it quite often. Indeed, it seems that after simply dwelling on the beauty found in nature, it should lead one to believe in God (Romans 1:20).

As noted above, the moral argument for God’s existence is strong. Although I defend it slightly differently than Craig does, I offer the same deductive version of the argument that he typically uses. It goes as follows:

In defense of premise (1), I argue that objective morality is logically grounded in God’s intent and purpose for creating humanity. I add the following: To a degree that a thing or being does not approximate to its objective purpose, then to that same degree that thing or being is objectively “bad.” Another argument is offered in support (See Does an Objective Moral Compass Point to God?):

It follows from this argument that if one acts in a manner that is not loving toward God and all people, then they are objectively wrong in their behavior. They are not approximating to the objective purpose of life and are thus, “bad” and “missing the objective mark” (sin).

With this same line of thought in mind, it seems an argument for objective beauty can be offered as well. Consider the following:

Premise (1) is tantamount to saying that if God does not exist, beauty is only in the subjective eye of the beholder. Premise (2), however, is basically stating that there are some things that are objectively beautiful — and something is objectively wrong with a person if they think otherwise. If this is true, then it follows that God exists.

Returning to morality: while there might be a few epistemic gray areas, there are clear examples of things that we simply know are objectively bad, wrong, and evil. The atrocities committed by the Nazis and Communists of the last century exemplify objective evil. We also know objective good things when we see them. The Thai Navy Seal sacrificing his life to save young soccer team members trapped in the flooded cave exemplifies a person approximating to the objective good in that instance.

Similarly, while there might be a few disagreements regarding aesthetics (for example, one might prefer the mountains to a tropical beach or vice versa), we simply know objective beauty when we see it. We are attracted to it. We know we ought to take an extended look, “breathe it in,” enjoy it, and thank God for His beautiful creation!

When we have a proper relationship with the Creator, we can properly enjoy His creation.

We have seen how God’s aesthetic intent behind creation grounds objective beauty apart from the subjective eye of the human beholder. Thus, if it is true that some things really are beautiful — even if a human beholder subjectively thinks otherwise — then Dr. Craig’s hopes are realized. Therefore, God exists.

To provide additional clarification, if God created a specific landscape (for example) for humans to find aesthetic appreciation and enjoyment, but a human does not, then something has gone wrong — either with the landscape or with the individual who does not appreciate the aesthetics of the landscape. Moreover, if one finds aesthetic appreciation in the gore of human torture and suffering (imagine images at Nazi concentration camps, for example), then one’s aesthetic appreciation faculties have been damaged. Humanity was not created to find these images delightful or beautiful. Indeed, the images of Hitler’s carnage are objectively ugly (even if one possesses an alternate subjective opinion).

In a PBS video regarding the rarity of blue found in nature, the speaker declares that these “butterflies are awesome, and if you don’t think so, you’re wrong!” I agree, but if he is right, and one can really be wrong about the beauty of certain things found in nature, then objective beauty exists. Therefore, so does God!