Over the past few years my life has been completely transformed by the renewing of my mind (Romans 12:2)! There have been many academics who have sharpened me along the way, but if push comes to shove and I were asked to provide the “Mount Rushmore” list of people who have influenced me the most when it comes to the branch of theology known as apologetics, I would offer these four names: William Lane Craig, Alvin Plantinga, JP Moreland, and Mike Licona.

Dr. Craig is my hero! I will never forget the first time I ever heard of him. It was 1999 and Darren Popple gave me a VHS tape to watch. This was a recording of a debate between “The Christian Killer,” Frank Zindler, versus some guy with three first names and a cool beard!

This guy with the cool beard was William Lane Craig, and although the vast majority of things they discussed in the debate were far above my head at the time, one thing was clear based on body language alone: the so-called “academic atheist” got his butt kicked and subsequently handed to him by the Christian with the cool beard!

Although I did not understand many of Dr. Craig’s arguments at the time (like some weird thing called a “Kalam“), I left the room that night with my head held high and my faith strengthened. Although I was not able to go make a “case for Christ” that night, I did know that there were some extremely sharp Christians who could go toe-to-toe with anyone and defend the truth claims of Christianity.

Nearly a decade passed before I even thought about apologetics again. I was a youth pastor who was content with merely making students memorize Bible verses and leading Bible studies. However, in 2008 that all changed when some of my youth group kids started asking tough questions. These questions were more than just “what does the Bible say about X,” these questions were, “why should we think the Bible is even trustworthy in the first place?” Many were beginning to doubt the truth of Christianity, and some were even becoming skeptical of the existence of God.

Since the Bible’s trustworthiness was in question, I soon learned the hard way that I could not merely appeal to the Bible to validate the Bible. Some of these students were asking good questions and I failed to provide coherent answers — or no answers at all. As a result, some of them walked away from the church and became atheists.

This shook me, but then I remembered the guy with the cool beard as I stumbled upon him in a Google search. Although William Lane Craig had since shaved his beard, he had also started a ministry called “Reasonable Faith” and I began reading all of his articles and books, listening to all of his podcasts, and watching all of his lectures and debates.

I never considered myself to be an intellectual, but I decided to listen to at least one of his Reasonable Faith podcasts every single day, and if I did not understand it, I would listen to it repeatedly until it made sense. In a mere six months of doing this, I was utterly transformed. Several years have now passed, and I have been transformed beyond measure. In fact, my wife jokes that I am no longer the same guy she married!

I encourage everyone to listen to William Lane Craig’s weekly podcasts and read his books “On Guard” and “Reasonable Faith.” God has used Dr. Craig in an amazing way to transform my life, but others have been influential as well.

The next guy on the Mt. Rushmore of Apologetics is Dr. Alvin Plantinga. I believe I have heard Dr. Craig refer to Plantinga as his hero. If memory serves, I also think Dr. Craig has said that Plantinga possess the “Midas touch” as every argument he touches seems to turn to gold.

Plantinga “stood on the shoulders” of Anselm, for example, and took the Ontological Argument for the existence of God to new heights. The Ontological Argument was crafted nearly a thousand years ago and it was essentially dismissed as a “charming joke,” until Plantinga skillfully reformulated the argument. Today it is taken quite seriously by many professional philosophers.

I also love Plantinga’s Evolutionary Argument Against Naturalism (EAAN). Although it is a different argument, there are some similarities between the EAAN and my Freethinking Argument (click here). I benefited greatly from his books such as “Where the Conflict Really Lies,” and “Knowledge and Christian Belief.”

Plantinga also dealt the death blow to the “problem of evil.” Scarcely any philosopher in academia today thinks that the existence of moral evil is good reason to not believe in God (many internet atheists have not yet received the memo). I have written extensively as to why the existence of evil actually proves the existence of God (as opposed to atheism), but more importantly, I have demonstrated why God would allow a world suffused with moral evil (click here). If it were not of Plantinga’s work, I would have no shoulders to stand upon while discussing the so called, “problem of evil.”

Moreland has been my “go to guy” when it comes to questions regarding the metaphysics of the human soul. He has paved the way on this topic and if it were not for him, I would have no shoulders to stand on as I make similar arguments for the existence of the soul and against naturalism. That is to say, when it comes to arguing for the existence of the human soul, JP is the man!

Moreland also had a huge influence on me and my spiritual formation! I will never forget my first classroom experience with him in October of 2011. Since I had already read some of his work, I was waiting for a mind-blowing lesson in logic and metaphysics; however, to my surprise, Dr. Moreland spent the majority of the class time encouraging us and teaching us how to walk closely with Jesus in a personal way.

We eventually got to mind-blowing lessons in logic and metaphysics, but I was so impressed with Moreland’s desire to make sure that we were doing more than just “loving God with all of our minds.” Moreland is a philosopher with a pastor’s heart.

I highly encourage you to purchase his short — but mind expanding — book called “The Soul” and also his book “The Kingdom Triangle.” You will see why he is atop of my “Mt. Rushmore.”

Finally, the guy worthy of the last spot on my Mt. Rushmore of Apologetics is the historian and Biblical scholar Dr. Michael R. Licona.

Mike was a “hero” of mine before I ever met him. One summer he was my lecturing professor at Biola University and he taught a class focused on the historical method. He then used the historical method to demonstrate that we could prove (with high degrees of historical certainty) that the resurrection of Jesus was in fact a real event of history. He even demonstrated that this was possible without even touching the Gospels in the New Testament.

Speaking of the Gospels, Mike Licona has done groundbreaking work in demonstrating exactly why the Gospels are reliable. Licona is well-known for his talk called “The As, Bs, and Cs of Defending the Gospels” and has even added the “Ds and Es” to the list! I encourage everyone to become familiar with his material at www.risenjesus.com.

Speaking of groundbreaking work, Licona has forged new territory in the field of hermeneutics! He has shown that the genre the Gospels were written in is most likely that of Greco Roman biography. He has become an expert in Greco Roman biography and has come to understand the compositional devices (or “tools”) that were academically accepted and commonly employed by these biographers during ancient times. Mike has also studied Plutarch (who is the most well known Greco Roman biographer who ever lived) extensively and examined Plutarch’s writings in view of the compositional devices he used more than has been done previously.

With Plutarch’s work in mind, Licona is able to demonstrate how the same compositional devices are used within the Gospels. This has significant impact when dealing with the supposed contradictions between the Gospel accounts. In fact, after understanding Plutarch, Greco Roman biography, and the compositional devices commonly employed in these biographies, these face-value contradictions of the Gospels melt away.

Licona’s book on this topic was recently released. I encourage you to purchase it now (click here)! Also, if you do not own Licona’s book regarding the historical evidence of the resurrection entitled “The Resurrection of Jesus: A New Historiographical Approach“ click on the title and purchase it too.

Over the past couple of years Dr. Licona and I have become good friends. In fact, I now just call him “Mike.” We chat about things other than Christian apologetics on a regular basis. He is a fun-loving guy and we both share many of the same interests (especially martial arts and Runza)!

Even though we are good buddies, I still consider him a hero and he deserves to have his face carved in stone on top of the Mt. Rushmore of apologetics.

Although many academics have sharpened me over the past few years (see the honorable mention list below), William Lane Craig, Alvin Plantinga, JP Moreland, and Mike Licona are the four guys who have had the greatest impact in my life thus far. God has used these men to transform me from a youth pastor who was not too serious about his blind faith, into a theologian willing to die for his reasonable faith! Why am I willing to die for my faith? Because I have come to understand all of the reasons as to why Christianity really is TRUE!

You may have a different “top four guys” than I do, but if you are new to this field, I encourage you to start with my “Mt. Rushmore of Apologetics.” 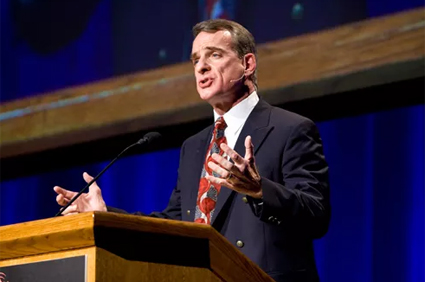