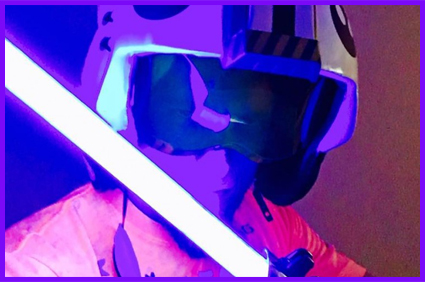 Ever since I was a four-year-old, my hero has been Luke Skywalker! I would pretend I had the power of the force and I would always have a lightsaber on my belt (usually my dad’s flashlight). Moreover, my Luke Skywalker action figures were always the ones to wear out first (or, as I would say, get “flopsy”). For decades I dreamt about all of Luke’s adventures after Return of the Jedi — and what he would be doing now at his advanced “Jedi Master” age. Needless to say, when I heard Disney bought the Star Wars franchise and was going to make a new trilogy of movies with the original cast my heart skipped about ten beats!

I loved Disney’s first attempt with Episode VII: The Force Awakens and I thought Rogue One: A Star Wars Story was brilliant. (I believe the Vader scene at the end is the best sixty seconds of cinematic history!) Although I thoroughly enjoyed “Awakens” there was one thing I thought it missed: save for the last scene, Luke Skywalker played no role in the movie and said absolutely nothing! All he offered was an incredulous stare.

So, I waited patiently for two more long years so that I could watch my childhood hero come to life and spring into action on the big screen!

Well, perhaps I set my hopes too high, but although I enjoyed the movie, I was slightly disappointed in Episode VIII: The Last Jedi. There were a few good moments and some epic lightsaber battles, but when I left the theater on opening night I sensed a disturbance in the force — something I have never felt before when leaving a Star Wars movie.

This “tremor in the force” was primarily because of my childhood hero, Luke Skywalker. Everything I had been imagining about his character over the past thirty years went down the drain. In my mind, Luke had become the most powerful Jedi to ever live! He had mastered the ways of the force in such a way that Yoda would pale in comparison. More than that, his confidence and faith in the force would be so strong that he would never doubt “the will of the force” as Qui Gon Jinn put it all those years ago in Episode I.

Instead, we got a Luke who is now only “Luke-warm.” He is much older but less mature. In “The Last Jedi” Luke is still the same whiny kid who “wanted to go to the Tosche Station to pick up some power converters” with his friends before his chores were done! Luke Skywalker, although now in his sixties, is still an immature and emotional brat who was leaping to conclusions that do not logically follow. In fact, I thought the Luke Skywalker of “Last Jedi” had regressed in maturity from the Luke Skywalker we saw in “Return of the Jedi” over three decades ago!

Why did this happen? This immature “Jedi Master” seems to suffer from the emotional problem of the Dark Side. Thus, because of this immaturity, Luke abandons the Jedi Order and closes himself off from the Force altogether. A friend summarized The Last Jedi in the form of a parody:

Rey: So, Master Skywalker, are you going to join the Rebellion and fight against the evil First Order?

Rey: That sounds like the exact opposite of what Luke Skywalker would do.

Luke: Not only is every word in that last sentence wrong, I’m also going to end the Jedi.

Luke: For over a thousand generations the Jedi were the guardians of peace and justice in the galaxy. But then they screwed up a couple times so I’m ending it. I’m closing myself off from the Force. In fact, the Force is dead to me!

Rey: That doesn’t make any sense!

Luke: I was the one who screwed it up last time so that Ben Solo would turn evil and become Kylo Ren. So, therefore, the galaxy is better off without the Jedi. People in the galaxy shouldn’t even think the Force exists!

Rey: No, because without the Jedi the dark side has an unchallenged champion: Snoke, who has nearly destroyed the Republic.

Luke: Oh, right, the dark side. I guess completely withdrawing from the Force was a really dumb idea. Maybe I should have joined the Rebellion against the evil First Order which would probably be more within my character — the Luke Skywalker who everyone knows! Oh well, I’m old and grumpy now and absolutely NOTHING can change my mind.

This older and “immature Luke” reminds me of many people in this galaxy (the real world) who leave the church — if not Christianity altogether — because of emotional issues. Typically, this is rooted in what is known as the “emotional problem of evil.” In fact, many atheists declare that this is the primary “reason” that they affirm atheism! Since many people allow themselves to be controlled by their emotions — as opposed to logic and reason — they often jump to the hasty (and faulty) conclusion that God cannot be trusted or simply does not exist because of the suffering and evil they have experienced.

However, if one chooses to take his thoughts captive (2 Corinthians 10:5) before being taken captive by certain thoughts (Colossians 2:8) and chooses not to be controlled by his emotions, and instead thinks things through logically, one can see what follows if an all-powerful, all-knowing, and perfectly loving God exists. Think about it: since God is all-loving, He desires an authentic and eternal loving relationship with each and every human being He has ever created. Since God desires an authentic love relationship with each individual human being, He had to give humanity the genuine freedom to choose to reject His love — or not. With rejection comes sin and these transgressions have infected this world with the dark side — evil, pain, and terrible suffering!

God, however, allows suffering caused by moral choices because suffering shapes us as well as brings us closer to Him, which is the greatest good a human being could ever experience. The Apostle Paul refers to this “greatest good” as “an eternal weight of glory” (2 Corinthians 4:17).

After reflecting upon God’s perfect love, the only way God could eradicate the possibility of moral evil and the darkness that it brings to the galaxy is if He were to eradicate the libertarian freedom of mankind. That would then eradicate the possibility of each one of us freely choosing to enter into a “true love” relationship with our Creator. That eternal love relationship with our Creator is the greatest good a person could ever experience; therefore, eradicating evil would be evil! With all of this in mind, when we keep eternity in mind, we see that it is good and loving that evil, pain, and suffering were made possible and allowed by God (See Why Evil & Suffering for more regarding this important topic).

Thankfully, Luke Skywalker finally came to his senses and embraced the force once again at the conclusion of The Last Jedi. Because Luke finally became reasonable he saved the day and the Rebellion against the dark side continues (and more Star Wars movies can be made). People in this galaxy, however, need to learn from Luke’s mistakes and not succumb to the emotional problem of the dark side. We must embrace the Ultimate Force (God) revealed by Jesus and stand strong! When this occurs, people in the galaxy will strive to love ALL people (from our neighbors to our enemies). Indeed, Jesus has defeated the dark side. He is the LIGHT of the world (John 8:12).