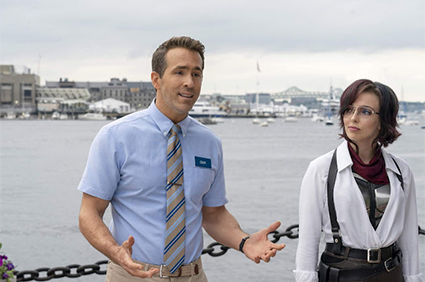 I saw Free Guy, starring Ryan Reynolds, on opening weekend — TWICE! I went to it on opening night with my lovely bride and then on Sunday afternoon I took my 19-year-old son to see the matinee. I absolutely loved this flick for several reasons: 1- it made me laugh, 2- it was well-written, 3- the acting was superb, and 4- once again we have a movie highlighting the importance of libertarian freedom.

Oh yeah, and 5- a couple scenes at the end will bring tears of joy to the eyes of any Avengers or Star Wars fan!

As Free Guy was coming to a close and the credits were about to roll I received a text from Bobby Conway, aka: The One Minute Apologist. He said:

“If you haven’t seen it yet, I’ve got a feeling you’re going to LOVE free guy with Ryan Reynolds. Lots of illustrations to draw from.”

“Bro, I’m walking out of the movie theater as we speak. That was phenomenal!”

We texted back and forth and then Bobby made a great point:

“The dude [Guy] is created thinking his life was bound, yet discovers he’s been created and his creator has given him the ability to choose freedom. The foil represents Lucifer trying to spoil the party.”

“He used his libertarian freedom to choose to be ‘the good guy.’ He also tried to help people see reality through the proper lenses.”

With spoiler alerts in mind, let me clarify:

Guy is a bank teller basically living paycheck to paycheck. He seems pretty happy with his boring and uneventful life because he has a best friend, a goldfish, enjoys a great cup of coffee every morning, and wears a light blue shirt every single day. However, unbeknownst to Guy, he is nothing but a causally determined and programmed NPC (non-player character), or a background character in a popular video game.

Due to a program uploaded into the game, Guy sees the woman of his dreams who is a real player (not a NPC) who goes by the handle “Molotov Girl” and this attraction to her (which was programmed into his character) breaks his pattern and somehow — and mysteriously — allows Guy to gain intentional states of consciousness, become self-aware, and accesses the ability to think and act in a manner that is not always causally determined by his programmer. That is to say, Guy breaks free from his algorithm and becomes a libertarian free-thinking agent!

He then attains special sunglasses that allow him to see reality. He uses his new powers of freedom and his knowledge of reality to change his previously causally determined course of fate and freely chooses to be “the good guy” and become a hero in a world of degenerates.

Guy continues to “level up” and purchases some new shoes and changes his blue button-up shirt for a more form-fitting blue shirt that is appropriate for a super hero. He becomes famously known as “Blue Shirt Guy,” and fights against evil and tries to influence others in the game to “do good.” In fact, Guy even tries to tell his friend about reality and asks him to put on the special sunglasses so he can view reality through the proper lenses. Guy says:

“These puppies changed my life!”

But his best friend would not put them on. It was almost as if he was not ready to be “unplugged from the Matrix.” This seemed to break Guy’s heart, but he did not give up on his friend.

Without giving away the rest of the story, Guy ultimately saves the day (and the virtual world) and helps all people — including his best friend — see reality. This leads to paradise (some might refer to it as Heaven)!

Does this sound familiar?

Although there were a couple “preachy” moments of leftist political talking points, I took those with a grain of salt and thoroughly enjoyed a really good and funny story that also made some deep philosophical points.