I love you man but I don’t want my politics and my religion mixed. I look up to you for religious context and commentary because you are an expert in the field. Not politics. That’s just your opinions and I can get that from every Tom, Dick and Harry… but not Tim.

Thank you for your kind words, Sean. However, in addition to your pleasantries are statements that I encourage you to consider more deeply.

It would be absurd not to have one’s worldview (religion) influence their politics. In fact, one’s worldview ought to do that much (not the other way around). That is to say, if one truly believes that God exists, created humanity on purpose and for a specific purpose, and that Jesus revealed how we ought to live, then the laws of politicians will either approximate to the “law above the law” (ultimate reality) or not.

If God does not exist, then humanity was not created on purpose or for a specific purpose. Thus, we would be mere accidents if atheism is true. If humanity is nothing but accidents then politics are objectively meaningless (along with everything else) as there would be no objective purpose of the existence of humanity (say goodbye to human rights). Thus, on atheism, it would not really be wrong (objectively speaking) if Obama, Trump, Hitler, or Stalin is calling the shots. It is merely one’s irrelevant subjective opinion.

If God exists and Christianity is true, however, then one’s subjective political opinions can be objectively right or objectively wrong.

Additionally, when a Christian claims they do not want their “politics and religion mixed” that is a good indicator that they probably do not understand their own religion for at least two reasons: 1- Jesus got involved in politics. 2- We are commanded to love all people and to share the gospel with the world.

First, consider the fact that Jesus constantly interacted with the Pharisees in the New Testament. The Pharisees were the religious and political rulers of Israel. Matthew 23: 23-24 provides a good example:

23 “Woe to you, teachers of the law and Pharisees, you hypocrites! You give a tenth of your spices—mint, dill and cumin. But you have neglected the more important matters of the law—justice, mercy and faithfulness. You should have practiced the latter, without neglecting the former. 24 You blind guides! You strain out a gnat but swallow a camel.”

Think about the “more important matters of the law” and modern-day America. Politicians today are more concerned about the consequences of using plastic drinking straws than placing restrictions on abortion (killing innocent human beings) and actually advocate for it in many cases. What do you think Jesus would say to these politicians? Based on His reaction to the political leaders of Israel, do you think Jesus would worry about hurting the feelings of modern-day politicians or those who vote for them? We must not disregard the “more important matters of the law.”

Second, if a Christian does not take politics seriously, then they probably do not take evangelism seriously. Frank Turek shows a satellite image of the Korean peninsula to make this point (See Why Christians Should Be Involved In Politics). 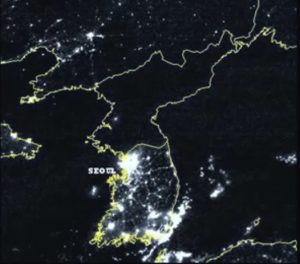 Notice the stark contrast between the north and south. South Korea is filled with light, activity, and productivity. According to Turek, “it is one of the most Christianized countries in the world.” North Korea, on the other hand, stands in polar contrast to their neighbors south of the border. North Korea is dark and seemingly “dead.” Turek accurately describes it as a big “concentration camp.” What is the difference between North and South Korea? One word: POLITICS!

Many South Koreans have heard the gospel of Jesus Christ because there is political freedom to share the gospel. The communistic government of North Korea, on the other hand, does not allow the gospel to be shared — it is a dictatorship. If you are a Christian, Sean, then you know that the gospel message is the most important information a person could ever have access to or possess. If you truly love all people — as Jesus commanded — then you must desire the people who have never heard the gospel to have access to this eternally vital information. Since politics is keeping millions of souls from hearing the gospel, if you truly love and care for all humans, then you should care about politics.

The Lesser of Two Evils

If you believe Christianity (your “religion”) is true, you must “mix” it with politics — at least if you are a consistent Christian and strive to love all people. After all, if Christianity corresponds to reality, then the politicians you support and vote for should strive to correspond to reality too. No politician will do this perfectly, but some political views approximate to reality more than others.

Bottom line: You kindly refer to me as an “expert” in my field (theology and metaphysics/ultimate reality). If that is true, then this expertise allows me to intelligently provide insight into things that fall under the umbrella of ultimate reality — like some political issues — as an expert too. That is to say, my political opinions are informed from my knowledge of reality. In fact, if one is trained how to think logically, then thinking logically applies to all aspects of life. This includes both religion and politics.

If one’s religion is true and their political view is also objectively good or right, then one’s religion and politics must be “mixed” . . . independent if they realize it or not.