a) seek Your face and strength.

b) praise You even in time of suffering.

c) love my enemies and pray for those who persecute me.

According to Chanequa Walker-Barnes, PhD (https://www.drchanequa.com/) the answer does not exclude (d). Yes, even with the caveat that this prayer is modeled after Bible doctrine and scripture, Dr. Chanequa claims that asking God to help one to hate White people counts as a viable prayer option.

In the book, A Rhythm of Prayer, a “devotional” book composed of a compilation of prayers by various women, edited by Sarah Bessey and published by SPCK (Society for Promoting Christian Knowledge), Dr. Chanequa has an entry titled, “Prayer of a Weary Black Woman”

The opening line of this prayer literally reads:

“Dear God, Please help me to hate White people. Or at least to want to hate them. At least, I want to stop caring about them, individually and collectively.”

The full text of the prayer can be found on Dr. Chanequa’s own website here. I encourage you to read it yourself to assuage concerns of misrepresentation or misquotation. (She has provided the link for public consumption from her own blog here: https://drchanequa.files.wordpress.com/2021/04/prayer-weary-black-woman.pdf)

It’s easy for Christians (White or otherwise!) to read this prayer and get offended. She herself admits that it is a very “strongly worded prayer.” I won’t speculate too much about her heart behind the prayer (only she and God can know that) and I won’t go into too much detail about the offensive parts of the prayer (you can decide for yourself which parts one ought to find offensive.) At any rate, offensive or not, just because one finds something subjectively offensive, it does not necessarily follow that it is objectively morally wrong. What I will do is look at her response to the growing level of push back she has received since her prayer went viral when someone saw a newly minted copy of the book on a convenience store bookshelf and posted a picture of the prayer on social media.

“Apparently a screenshot of my prayer from “A Rhythm of Prayer” is floating on the socials. The folks critiquing have clearly never read Psalms (other than 23 & 100). Cause then they’d recognize what it’s modeled after.”

Firstly, it should go without saying that if I see a good thing and attempt to model something after it, there’s no guarantee that my thing will also be good. (One only needs to Google “failed Pinterest projects” to see proof of this claim!) So claiming that her prayer is “modeled” after some psalms is not a good defense for the unbiblical nature of her prayer. Remember that time someone said, “I will make myself like the most high”? (Isaiah 14:14) That didn’t work out too well for him. Merely attempting to model X after something good does not automatically entail that X will, in fact, be good.

Secondly, Dr. Chanequa deflects the criticism by saying that her critics likely haven’t read the Psalms (other than a few popular chapters) otherwise “they’d recognize what [her prayer is] modeled after.”

I beg to differ, Dr. Chanequa!

It’s clear that Dr. Chanequa is trying to emulate some of the imprecatory psalms (to ‘imprecate’ means to curse or to wish a curse upon someone or something.) She even gives this as explanation in a blog post you can read here:

https://drchanequa.wordpress.com/2021/04/08/prayer-of-a-weary-black-woman/ She goes as far as to link a resource to define and explain what imprecatory psalms are. (https://www.crosswalk.com/faith/bible-study/10-things-you-should-know-about-the-imprecatory-psalms.html) But it’s precisely because many Christians HAVE read Psalms that we recognize her prayer as categorically unbiblical and distinctly unlike the imprecatory Psalms.

Even in the resource that she graciously linked, the article says:

“What we read in these OT Psalms are not emotionally uncontrolled outbursts by otherwise sane and compassionate people. Imprecations such as those listed above are found in high poetry and are the product of reasoned meditation (not to mention divine inspiration!). They are calculated petitions, not spontaneous explosions of a bad temper. Certainly there are examples in OT history and prose narrative of actions and attitudes that are sinful and not to be emulated. But the psalms are expressions of public worship to be modeled.”

Which stands in stark contrast with Dr. Chanequa’s own explanation of her prayer:

“I wrote it in a heated moment. A White person – someone whom I would have called a friend – dropped the N-word in a casual conversation…”

“So I was hella triggered when that person used the N-word. And I was already past deadline for my contribution. I could have done a lot with that rage. I could have sought vengeance, maybe putting the person on social media blast in order to try to ruin their reputation. But I didn’t…”

Further, the imprecatory psalms all deal with calling on God’s judgement against people who hate God.

[Psa 139:19-22 NASB20] 19 If only You would put the wicked to death, God; Leave me, you men of bloodshed. 20 For they speak against You wickedly, And Your enemies take [Your name] in vain. 21 Do I not hate those who hate You, LORD? And do I not loathe those who rise up against You? 22 I hate them with the utmost hatred; They have become my enemies.

Dr. Chanequa’s prayer is targeted at White people. That is an outward, physical categorization of people and has nothing to do with a person’s heart or behavior. Does it really need to be said over and over (and over) again that God does not see as man sees, since man looks at the outward appearance, but the LORD looks at the heart (1 Sam 16:7) and if you show partiality, you are committing sin [and] are convicted by the Law as violators (James 2:9)?

Now, to be fair, it could be said that her prayer leans on some creative redefinitions, popular in Critical Race Theory, that change the term “White” or “Whiteness” from a purely outward appearance (one’s ethnicity) to a system of beliefs and behaviors (hegemonic structures about what is normative typically in the Western or Judeo-Christian worldview.) So a proponent of Dr. Chanequa’s might say ‘hating White people’ is more about ‘hating people who support hegemonic normative power structures that oppress minorities and underprivileged’ or some other such thing. Be that as it may, it’s still NOT biblical. The Bible is clear: “But I say to you, love your enemies and pray for those who persecute you.” (Matthew 5:44)

First, what use is a prayer to God if the thing you are asking for is something you know is against God’s will? That sounds dangerously close to putting the Lord your God to the test (Deut 6:16).

Second, to say that she is asking God to help her hate White people because she herself does not, reaches new heights of pedantry! She clearly has a disdain for White people — a confession she makes when she asks God for a “Get Out of Judgement Free card” for if and when she does not hold White people accountable. Think about her words: “Lord, grant me, then, the permission and desire to hate the White people who claim the progressive label but who are really wolves in sheep’s clothing.”

In other words, her prayer is more of a ‘give me permission to do this sinful thing that I am already doing.’

If you pray that God lets you have a thing, X, then that means you want the thing, X. Hence, the prayer.

Can you imagine praying “I do not sin in this area, but God, help me to sin in this area!” Moreover, then having the gaul to say this is a biblical prayer? I really would love to hear some sound arguments that this is biblical and good.

Lastly, though, I do want to give Dr. Chanequa some credit. The end of her prayer does sound something like a biblical prayer of contrition and humility. She does praise God for His keeping her from suffering at the jaws of racism in worse ways than she does. She also seems willing to love those who are hurtful toward her and sin against her. But it still seems odd that this part is preceded by such vile, racist language like “if you can’t make me hate them, at least spare me from their perennial gaslighting, whiteman-splaining, and White woman tears” and “let me imagine them instead as white-hooded robes standing in front of burning crosses.”

The imprecatory psalms, also typically end with humble and contrite pleas for God’s mercy and a willingness to search and follow His will. So the juxtaposition is not unprecedented. Psalm 5 starts off incredibly harsh and ends like this:

10 Make them pay, God; Have them fall by their own schemes! Scatter them in the multitude of their wrongdoings, For they are rebellious against You. 11 But rejoice, all who take refuge in You, Sing for joy forever! And may You shelter them, That those who love Your name may rejoice in You. 12 For You bless the righteous person, LORD, You surround him with favor as with a shield. (Psalm 5:10-12)

I can see where Dr. Chanequa is trying to go with this prayer. It’s provocative, it’s honest and raw. She harbors hurt and has suffered; she sees injustice and pleads for God’s judgement. That is commendable.

Where she goes terribly wrong, however, is two-fold: (1) asking God permission to judge rather than asking God — the arbiter of truth; value; morality; justice — to judge for Himself; and (2) casting imprecation on a people group based on group identity rather than individual, sinful behaviors. The prayer, if it is her own sincere prayer, has validity — but it would be much better suited as a prayer of confession rather than prayer of imprecation.

“Whoever says he is in the light and hates his brother is still in darkness.” (1 John 2:9) 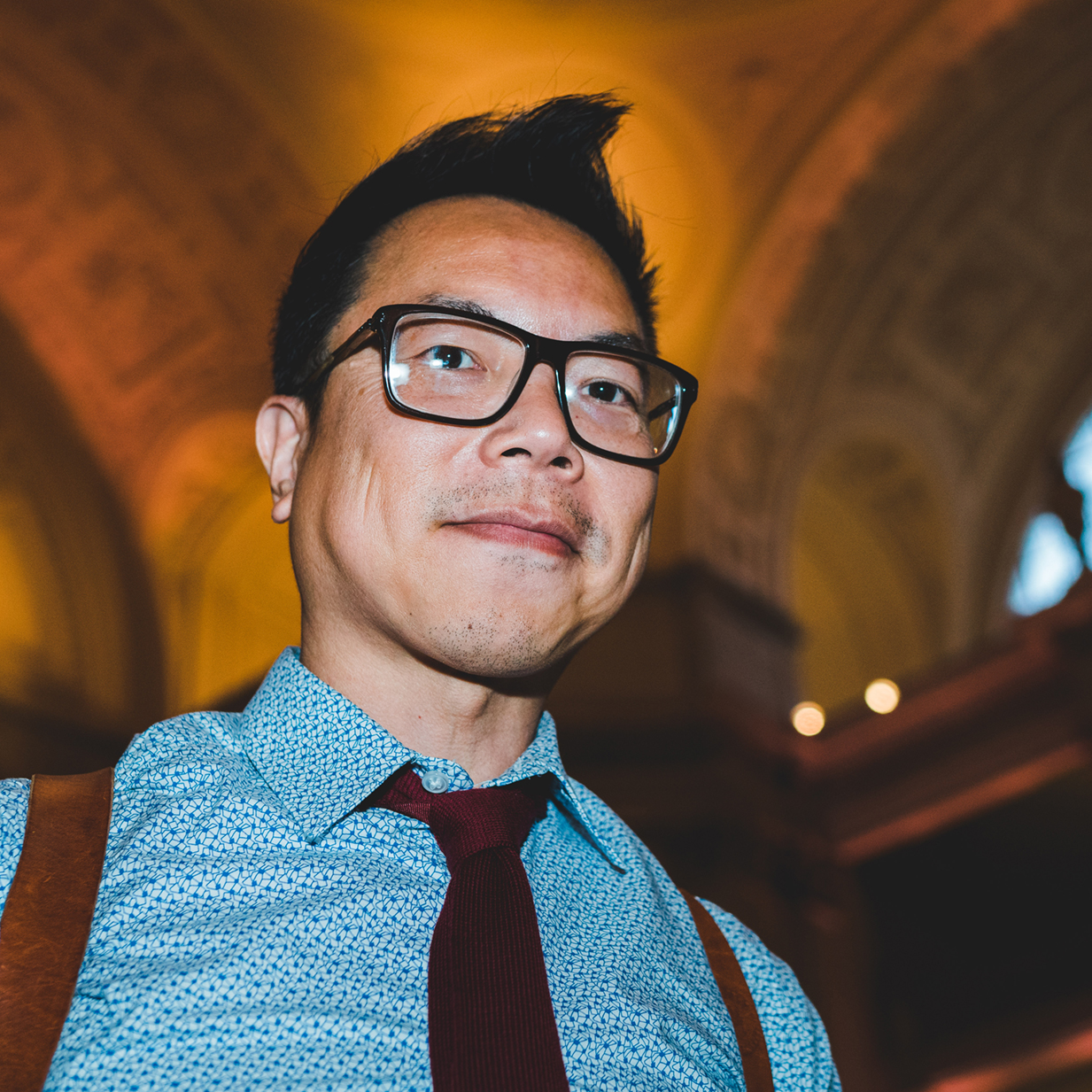 Andrew Hsu is neither a scholar nor a philosopher but plays one on the internet. Andrew is a lay-person with a passionate interest in Christian Apologetics. He volunteers as a Reasonable Faith Chapter Director in Fremont, CA where his home church is located. He is a professional photographer and video producer, lives with his wife of 23 years and has two grown children both attending Arizona State University. Andrew spends his free-time starting theology books he doesn't finish and playing Warzone. He can be reached at andrew.hsu@reasonablefaith.org