Abstract: This is a response to CARM’s article, “What is middle knowledge and is it Biblical? I will respond to the issues in the order they appear in CARM’s article: a faulty definition of middle knowledge, the belief that aseity means that God is “noncontingent”, the redefinition of aseity to mean that God cannot have contingent knowledge, and lastly, the idea that prevenient grace implies that man is able to choose God apart from God’s grace.

The above quote is the conclusion of an article by Matt Slick of carm.org, where Slick argues that Molinism is unbiblical. Given that CARM is an organization that has considerable influence and prides itself on apologetics, it should be a given that they would seek to accurately represent views they disagree with. However, this is not the case with CARM’s article. Therefore, I will refute CARM’s article with the intent of providing accurate information to those curious about Molinism.

The article begins by providing an erroneous definition of middle knowledge:

“According to Molinism, Middle Knowledge is the knowledge that God has about any free will choice any person might make at any time, in any circumstance.”

“The reason that Craig is saying this is because God’s middle knowledge is dependent upon the foreseen libertarian free will choices that people will make. Therefore, God’s knowledge has areas of contingency. But this makes no sense because whatever occurs does so because God has ordained it to happen. After all, nothing occurs without the will of God (Eph. 1:11; Prov. 16:33; Lam. 3:37-38). So, God knows what will happen because he ordains it. His knowledge is not contingent on the foreseen, sinful, libertarian free will choices of creatures.”

Moving forward, there also seems to be another error on Slick’s part. Slick states that middle knowledge is “dependent upon the foreseen libertarian free will choices that people will make”. Slick provides no justification for the belief that this is implied by Molinism. Moreover, what needs to be understood here is that Molinists stipulate that middle knowledge is essential to God. Instead, what is contingent on Molinism is the content of God’s middle knowledge. As Craig notes,

Slick then goes on the say the following:

“Furthermore, such middle knowledge, which is based on God’s perceived libertarian free will of creatures, risks violating God’s aseity. This is the teaching that God is eternally independent, noncontingent, and self-sufficient in all that he is. But, Molinism says that God’s Middle Knowledge is contingent upon God eternally knowing foreseen, human, libertarian free will choices. This is, in my opinion, heterodox.”

William Lane Craig is perhaps the foremost defender of the doctrine of divine aseity. In, God Over All: Divine Aseity and the Challenge of Platonism, Craig writes the following:

“Central to the Judaeo-Christian concept of God is the notion that God is a self-existent being. That is to say, God is not dependent upon any other being for His existence; rather, He exists independently of everything else. Were everything else magically to disappear, God would still exist. God has the property or attribute of self-existence.”3

You will notice some incongruity between Slick’s and Craig’s definitions of aseity. While it is true that God is non-contingent, Slick provides no justification for believing in his definition. Aseity, as Craig has noted, means that God does not depend on anything else for His existence. That in mind, Molinists aren’t claiming and neither does Slick provide an argument for the claim that on Molinism, God depends on his Middle Knowledge for his existence. After all, as we have previously discussed, the content God’s Middle Knowledge is not essential to His existence. It seems, then, that Slick’s definition of aseity is ad hoc, for it gratuitously posits that aseity concerns God’s noncontingency in all respects only as a means to object to Molinism.

As we reach the end of the article, Matt Slick once again demonstrates his ignorance. He writes:

This misunderstands what prevenient grace means. Moreover, Slick provides no citations from whence he derives his definition. The Oxford Dictionary of the Christian Church defines “prevenient grace” as:

“The species of actual grace which, as an illumination or inspiration of the Holy Spirit, precedes the free determination of the will. It is held to mark the beginning of all activity leading to justification, which cannot be achieved without it, but its acceptance or rejection depends on man’s free choice”4

In short, prevenient grace affirms that God has providentially enabled persons to make to salvific choices. Additionally, it’s worth noting that libertarian free will is the position that we are sometimes free to make morally significant choices and that freedom is incompatible with determinism. Peter Van Inwagen defines libertarian free will as “the conjunction of the free-will thesis and incompatibilism”[5] Notice, however, that such a definition does not stipulate or imply that there are no factors which delimit our freedom, such as our having a totally depraved nature. Instead, libertarian free will only requires that we make some choices that are not causally determined. As such libertarian free will is compatible with the claim that our freedom to come to God without prevenient grace is delimited by our totally depraved natures.

Conclusion
In conclusion, CARM lacks the nuances that are required in order to understand Molinism. If any of the things Matt Slick had to say about Molinism were true, I would agree that it would be heterodox or unbiblical. However, the sheer disregard for nuance in the definition of middle knowledge, the lack of understanding when it comes to aseity (and the flat out redefinition of it), and the complete misunderstanding of what prevenient grace serves as evidence for myself and the Molinist community as a whole that CARM is sorely lacking in its understanding of Molinism. It is my sincere hope and prayer that through this article and the other articles produced by FreeThinking Ministries would provide the correction that is desperately needed concerning Molinism on CARM.org. Perhaps then, we would find ourselves having much more profitable discussion, and reach the level of brotherly love that we are commanded to have for one another.

1For a more comprehensive treatment on the difference between might and would counterfactuals visit: https://freethinkingministries.com/an-unfortunate-appraisal-of-molinism-a-response-to-carm-orgs-what-is-molinism/

2 Craig makes this distinction in his article, “No Other Name: A Middle Knowledge Perspective on the Exclusivity of Salvation Through Christ”: http://www.reasonablefaith.org/no-other-name-a-middle-knowledge-perspective 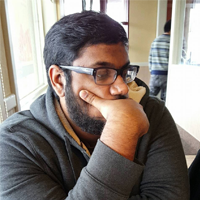 Luke Mahadeo is a resident of Jersey City, New Jersey that enjoys technology, video games, and anything to do with food. While his profession is in computers (with a Bachelor's in Information Technology and pursuing a Master's in Cyber Security), Luke also developed a passion for philosophy, Christian apologetics and theology after listening to debates by William Lane Craig on various topics including the existence of God, the historical reliability of the Gospels, and the problem of evil. Luke learned of Molinism when William Lane Craig debated Raymond Bradley on the topic of Hell, and has since found himself defending Molinism against opponents and detractors of it. In addition to that, Luke regularly defends Christian theism online and irregularly documents his thoughts concerning various philosophico-theological issues on his blog at guyanesetheologian.blogspot.com.