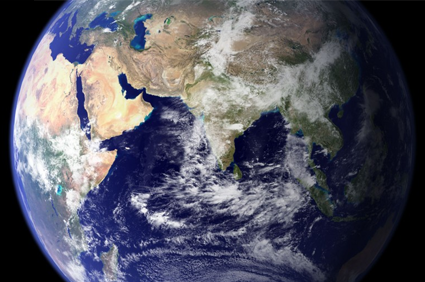 In my last article, I examined the problem of evil, asking if it would be possible for God to create a world without evil while allowing us to have free will. (Spoiler alert: No.) This week I want to look at pain and suffering through the lens of worldview. It’s easy to kick back and ask why God allows evil, but I’m more concerned with finding a cohesive worldview where the existence of evil makes most sense. (And if the concept of worldview is completely foreign to you, check out this introductory article I wrote.)

But first we need to understand what it means for evil to be real. I’m not saying there is some tangible object called evil out there somewhere, like a giant monster. After all, evil isn’t a thing; it’s a lack of a thing. Evil is the absence of good the way that darkness is the absence of light. To claim that evil is real means there exists a real standard of goodness and any deviation from it is evil. Morality is objective, and so it is independent of what anyone says or thinks. The alternative is subjective morality, which means that right and wrong are determined by human beings, either as individuals or within a culture. It’s a matter of opinion, taste, or preference.

At this point, if you don’t believe in objective evil, then there’s no need to read any further; the problem of evil isn’t a problem for you. For instance, some eastern worldviews hold that pain and suffering are just an illusion. And if you think that morality is subjective, any claims of something being evil is just your personal opinion. Then it’s just your opinion against God’s. And God wins. But if you agree with me that evil is real, you need to make sure it fits into your worldview.

So let me begin with my worldview: the Christian worldview. And to be clear, Christianity is more than just a religion; it’s a way of viewing all of reality and living accordingly. And according to Christianity, evil is real. It is anything that goes against God’s good nature and commands. So in Christianity, there is a real moral standard that you either live up to or you don’t. It’s objective in that is completely external to mankind and not subject to human opinion. Morality is grounded in God.

Now, you may disagree that the Christian God is good. You may not like His commands. That’s not the issue. All I’m saying is that the puzzle piece of evil fits into the Christian worldview. That’s it. We can handle objections another time (or in the comments). If you believe that evil is real and objective, Christianity is a viable worldview for you.

But of course Christianity isn’t the only one. You may believe that morality is real and grounded in someone else. That’s fine. (At least within the constraints of this blog article. We want you to be a Christian.) But you may ask, why must morality be grounded in a someone and not a something? For instance, you may be a moral realist, believing that virtues like honesty and bravery exist as abstract objects. The problem is that abstract objects can’t impose any duty upon us. They can’t do or cause anything. For example, the number seven doesn’t do anything; it just is. So even if justice exists, there’s no reason I should or ought to be just. Moral duties exist between persons, not things. So for virtues like honesty and justice to be binding, moral goods that we should strive towards, they must be grounded in a Person: God.

Atheists are quick to point at all of the evil in this world, using it as evidence that God does not exist. But under naturalism, what is evil? Naturalists simply have no objective standard. Any kind of morality would have to be subjective, up to human opinion or preference. Simply put: Real evil has no place in the naturalistic worldview. After all, how could it? Naturalism is the belief that only the natural exists: matter, energy, stuff. How could an immaterial standard of goodness fit into this? It doesn’t.

Now, some naturalists do think that morality is objective. For instance, one option is that good is whatever promotes human flourishing and decreases suffering. And that sounds really nice, until you ask why. Why should I care about the well-being of other humans? Why should I worry if others suffer as long as I’m happy? The response will probably be: “Everybody knows it’s wrong to hurt people and it’s good to help others!” But notice the shift here: everybody knows right and wrong. As a Christian, I heartily agree that even the most ardent atheist can know right from wrong because God wrote His moral code on our hearts. It’s built into us. (See Romans 2.) And this code is objective because it’s grounded in God’s good nature.

But the issue is not with knowing; it’s with being. Or as philosophers put it, epistemology versus ontology. It’s not about knowing right from wrong. It’s whether or not a moral standard exists. Now, promoting human flourishing sounds really nice but, under naturalism, it’s still a subjective standard because it’s one we made up. No matter how many people agree, even if the entire world voted unanimously to make human flourishing the ultimate standard of morality, it would still be subjective. Everyone believing in a moral standard does not make it objective; it just stands as evidence that a moral standard exists.

So the naturalist who claims that evil is real has hit a dilemma: he must 1) abandon naturalism or 2) deny the reality of evil. Either way, the naturalist cannot use objective morality as an argument against God. If he abandons naturalism, what else will he take on as his worldview? In what kind of worldview does real evil make most sense? A theistic one. And if he instead chooses to deny objective morality, he also loses the problem of evil as evidence against theism.

Or he can be dishonest and live inconsistently with his worldview, which many atheists choose to do.

Remember, my point isn’t to give reasons why God would allow evil. I want to find a worldview in which the existence of real evil makes the most sense. The atheist can know that things like murder and rape are wrong but he can’t objectively say that they are wrong. Real evil fits into the Christian worldview but not into naturalism. So make your choice: evil or naturalism. But you can’t have both.

If you enjoyed this post, I highly recommend Stealing From God by Frank Turek, in which he discusses many things – including evil (chapter 5) –  that only make sense from within a Christian worldview.