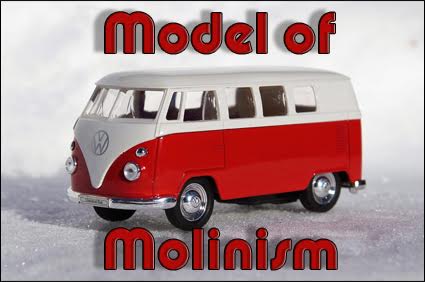 Many reformed folks (freely?) choose to reject Molinism because they contend that this theological view “smells of synergism.” What is this stench that reportedly makes John Calvin turn over in his grave? Simply put, synergism is the view that man plays at least a small part in his own salvation process. Monergism, on the other hand, is the view that God is the author of salvation from beginning to end.

Since Molinism affirms that man is free to choose to reject God’s saving grace or not, many Calvinists jump to the conclusion and assume that Molinism must be synergistic. This does not necessarily follow.[1] Consider one possible model:

1- God, by nature, is a volitional unmoved mover who is free to choose between options in accord with His nature. (This is supported via the Kalam and the Argument from Time).

2- By God’s grace, humans are created in the “image of God.” By nature, then, we are free to choose between options in accord with our nature. (This is supported via the Freethinking Argument).

3- Adam & Eve freely chose to disobey God and this sin completely separates humanity from God. This is what it means to have a “totally depraved sin nature.” (Every aspect of man is separated from God).

4- In this state of depraved separation from God (sin nature), humans do not even know God exists if merely left to our own devices.

5- If humans do not even know God exists, then, left to our own devices and apart from God’s grace, it would be impossible to choose to love and follow God (thus, Pelagianism is impossible on this view).

7- Therefore, by God’s grace, human nature has changed from a “totally separated from God nature” to a nature that has now experienced enough divine revelation (influences) allowing all mankind to start making some free and volitional choices in accord with our new nature; namely, to choose to resist God’s grace and revelation, or not.[2] Mankind is without excuse because we do not have to resist what God has made clear (Romans 1:18-20).[3]

[Note: According to Calvinist, Matt Slick (albeit inadvertently), Mark 4:10-12 implies that if an unregenerate person gets access to clear and accurate information, then they possess the ability to become Christians!]

8- If one does not reject or continually resist the grace and revelation God provides them, then God will continually provide more and more until the person reaches the point of “no return” and will become saved.

Thus, God does ALL the work in salvation from beginning to end on this Molinistic model; all the human can do is freely resist God’s grace and revelation, but he or she does not have to! The human does nothing to gain salvation apart from God’s grace on this Monergistic Model of Molinism. Note this helpful chart by Jesús Hernández: 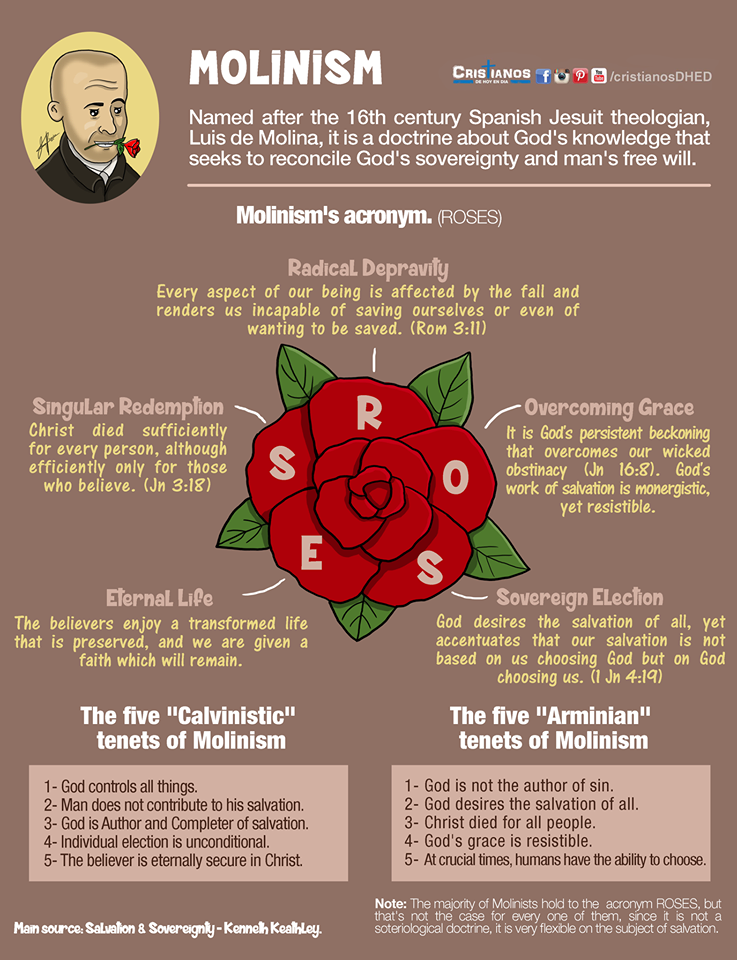 It is by God’s grace alone that humanity is created with intentional consciousness possessing an ability to think about things and the ability to freely choose between options one is freely thinking about (which is in accord with one’s God-given nature). After the “free fall” of Adam separating humanity from God, it is only by God’s grace alone that humanity is “slowly introduced” back to God. This makes sense of “Why God Hides” (I love the apologetic power Molinism provides)!

One might object and assert that God does not need to take individuals on a grace journey “along the way” to slowly introduce individuals back to God. Some assert that merely being in the presence of the Holy Spirit is sufficient to irresistibly draw any person instantaneously. We have biblical data, however, to reject this claim. After all, if this were the case, then why did Adam, Eve, Satan, and a third of all the angels freely reject God while in His very presence? With eternity in mind, perhaps an epistemic distance from God is better for free and finite creatures. This also allows one to “slowly” fall in love with God.

Now, noted elsewhere, if I were forced to choose (if I possessed the libertarian ability to actually choose among options) between only two options: a view with just a little bit of synergism (totally provided by God’s grace) sprinkled in, or deny the Maximal Greatness of God as 5-point TULIP Calvinism (or any flavor of exhaustive divine determinism) entails, I will always freely choose to affirm that God is omnipotent (all-powerful), that God is omniscient (all-knowing), and that God is omnibenevolent (all-loving and desires the eternal best for all people). God is a Maximally Great Being and the Bible makes this clear.

A TULIP interpretation of the Bible inadvertently assumes that God is not Maximally Great in one or all of these attributes (See Extra-Biblical Data & Hermeneutics).[4] Based on my ability to freely think, I think this deterministic interpretation of Scripture is dead wrong! This particular and quite common Calvinistic interpretation of the Bible — if true — shows God to be anything other than a Maximally Great Being! Many TULIP Calvinists claim to hold a “high view of Scripture” (even though I argue that their interpretation of the Bible is wrong), but by doing this, as A.W. Tozer points out, TULIP advocates have demonstrated they posses a very “low view” of God. In his book The Knowledge of the Holy, Tozer writes, “What comes into our minds when we think about God is the most important thing about us.” In the preface of this same book he notes:

The Church has surrendered her once lofty concept of God and has substituted for it one so low, so ignoble, as to be utterly unworthy of thinking, worshipping men. . . The low view of God entertained almost universally among Christians is the cause of a hundred lesser evils everywhere among us.

With all of that said, however, a Molinist does not have to be a synergist! A Molinist can also logically affirm monergism!

Contrary to popular belief in many reformed circles, Calvinism does not own exclusive rights to monergism. Both Calvinism and Molinism offer different models each explaining how God can be the author of salvation from beginning to end. At face value, both models are possibly true. As one digs deeper, however, it becomes clear that the TULIP model is logically incoherent when held along side essential Christian doctrine. That is why Molinism is the inference to the best explanation and the inference to the best interpretation of all Scripture as a whole.

*To my brothers and sisters in Christ who affirm Calvinism, please consider two articles demonstrating how your current beliefs are compatible with Molinism or at the least “Mere Molinism.” See Kirk MacGregor’s article “Can One Be Both a Calvinist & a Molinist?”  and an article I wrote entitled, “Questions for Calvinists.”

[1] Consider two other models demonstrating the monergism Molinism offers. Phillip Mast discusses Kenneth Keathley’s “Abulatory Model” in “How God Shows No Partiality in Relation to Salvation,” and Johnny Sakr provides his “Current Analogy” to explain the same process in a different manner in “The Monergistic Molinist.”

[2] To clarify regarding this “new nature,” I am not implying that this “new nature” is a “saved nature.” I mean that one’s “nature” has changed from a nature that did not even know there was something to resist, to a nature now aware of something to resist — or not resist. If one chooses not to resist, this is not a choice to seek or pursue God (no one seeks God according to Romans 3:11). It is simply a choice to do nothing.

I think an infant is a good illustration (and perhaps why many hold to an age of accountability). The infant has no idea that God exists and makes no conscious decision to resist God. Infants definitely have no ability to choose God either. I think that if God simply left mankind to our separated and “totally depraved” devices — never providing any prevenient or common grace of any kind — then all mankind would remain in an “infant state” at least as far as God is concerned. As the child grows they begin to be aware of options of which they can choose. This is why many argue for an age of accountability (even though Calvin contended that the damned are “doomed from the womb” in  the Institutes of Christian Religion, Book 3, Chapter 23, Paragraph 6)

[3] If one does not like the wording of this step of the model, Johnny Sakr offers a slightly different option:

*7- Therefore, while the sinful nature of man remains depraved; God’s common grace prevents mankind from becoming “as evil as they could be.” This is not some autonomous work of man, but rather the grace of God which provides mankind an ability to freely choose not to resist God’s saving grace. This does not necessarily imply that one makes a positive choice to seek God; rather, they can freely choose not to resist and simply do nothing (which allows God to do all the saving work). Mankind is without excuse because we do not have to resist what God has made clear (Romans 1:18-20).

As per Calvinist, R. C. Sproul from his book, Chosen by God:

“How does this work? To understand it properly we must first look briefly at another concept, God’s common grace… One of the most important elements of common grace we enjoy is the restraint of evil in the world… By his grace he controls and bridles the amount of evil in this world. If evil were left totally unchecked, then life on this planet would be impossible.

All that God has to do to harden people’s hearts is to remove the restraints. He gives them a longer leash. Rather than restricting their human freedom, he increases it. He lets them have their own way. In a sense he gives them enough rope to hang themselves. It is not that God puts his hand on them to create fresh evil in their hearts; he merely removes his holy hand of restraint from them and lets them do their own will.”

[4] When I reject “TULIP Calvinism” I am specifically referring to the “I” of the TULIP acronym: “Irresistible Grace.” I am, however, open to nuanced definitions of the other four points (See “Why I’m Not a TULIP Kind of Calvinist,“ and “T.R.U.M.P.“). I have been referred to as a “4-point, middle knowledge, free will, Calvinist!” That describes Molinism perfectly!

Both are unbiblical concepts based on an erroneous conclusion that mankind is born without the moral capacity to understand and trust the truth inspired by God. This is quite a difficult presumption to swallow when you really think about it.

The lost can believe the truth of a US History book but not the Bible? What does that even mean?

Granted, no one can come who hasn’t heard and learned from the Father and the Son (Rom 10:14) but to assume that means that hearing the gospel appeal isn’t sufficient to lead one to saving faith is not founded biblically as far as I can tell.

God graciously sent his word; so to assume God’s gracious work needs more grace to work seems like superfluous theological baggage that has been merely assumed to be true but without biblical warrant.

If there is a “prevenient Grace” it should just be called “gospel truth” or the light of His revelation. His Word.