Ever since I was a four-year-old, Star Wars has been a central part of my life. As a young boy I would pretend I had the power of the force and I would always have a lightsaber on my belt (usually my dad’s flashlight). Much has changed now that Disney owns the Star Wars franchise.

I loved Disney’s first attempt with Episode VII: The Force Awakens and I thought Rogue One: A Star Wars Story was brilliant. They completely missed the mark, however, with Episode VIII: The Last Jedi. I absolutely despised that movie (see my review here).

Given the fact that Rian Johnson missed the mark with Episode VIII, although my hopes were high, I walked into the movie theater on opening night of Episode IX: The Rise of Skywalker, with low expectations. To my surprise, these “expectations” were surpassed at light speed! In my opinion The Rise of Skywalker is the best Star Wars movie to hit the theaters since 1983!

Although I had some “minor issues” with it, the movie had some great surprises, a good storyline, some of the best acting in any of the Star Wars movies, and it was visually the best in the entire saga — it was not even close in that department. Plus it made me cry a little bit (don’t tell anyone)!

Consider the top FIVE reasons why I loved Episode IX:

1- Redemption and The Prodigal Son

Han and Leia love their son Ben Solo (aka, Kylo Ren) unconditionally. No matter how evil his acts were, Han and Leia still loved their son and were willing to fight — willing to sacrifice their lives — to see their son leave his life of darkness. This is exactly how God feels about YOU!

Many people feel like they have done “too much evil” for God to ever want to be in a relationship with them. This is simply not true. In fact, Jesus makes this clear by telling the Parable of the Prodigal Son found in Luke 15:11-32.  Jesus is telling this fictional story of a dad who is loving his son the way God loves all humans (John 3:16; 1 Timothy 2:4; 2 Peter 3:9). Jesus is telling this story of a loving father so that those listening to this story will begin to understand the way God loves all humans.

If the son would have never made the free choice to return to his father, then their relationship would have never been restored. Ben/Kylo knew what he was supposed to do, but did not know if he had the ability or the “strength to do it.” Thanks to God’s grace, we all have the ability to resist evil (or not). Kylo made the right choice, returned to his father’s love, and became Ben Solo once again!

Han and Leia’s example is representative of God’s love for YOU. God loves you unconditionally, just as the father in the parable, and His love is always there for you. You might feel as if you have walked a million steps away, but God’s love for you is only one step back.

One of the things I love the most about the movie is the end when Rey goes to the place where it all started back in 1977 (talk about “a long time ago…”) to where Luke Skywalker was raised on the planet Tatooine. They say a good story — and even a good blog article — “ends where it begins.” JJ Abrams does this perfectly.

As Rey buries Luke and Leia’s lightsabers in the sand and ignites her new orange lightsaber, an old gypsy woman passing by asks her who she is. Rey has wondered where she came from throughout the trilogy, and now knows that her lineage traces back to the most evil being to ever exist in the galaxy. She then realizes that true identity is not found in one’s DNA, but rather, in ideology.

She responds to the old gypsy: “I’m Rey Skywalker!”

The “force ghosts” of Luke and Leia show up and approve. Rey has been adopted into the Skywalker family.

Adoption is one of the main themes of Christianity. It does not matter if one is “red, yellow, black, or white.” One’s DNA is irrelevant! All people matter — in an objective sense — and are invited to love God (through Jesus Christ) and all people for eternity. You are invited to place your identity in Christ alone.

This is what unites the body of Christ as “brothers and sisters.” It is said that “blood is thicker than water,” but this spiritual bond is much “stronger than blood,” as Luke Skywalker proclaimed (and also stronger than midi-chlorians)! You are invited to become adopted by the King of kings. Consider Galatians 4: 5-7:

5 God sent him to buy freedom for us who were slaves to the law, so that he could adopt us as his very own children. 6 And because we are his children, God has sent the Spirit of his Son into our hearts, prompting us to call out, “Abba, Father.” Now you are no longer a slave but God’s own child. And since you are his child, God has made you his heir.

Just as Rey chose to identify as a Skywalker, you are invited and “prompted” to make a choice to identify with Jesus Christ and become a Christian!

3- You Are Not Alone

I love how the movie explains that evil strives to make good people feel marginalized and alone. This is evident on social media as many attempt to gang up on young Christians who endeavor to live godly lives and espouse Christian values. In fact, it is because of these evil “bullies” that I started FreeThinking Ministries. We desire to let young people (or people of any age) know that they are not alone and FTM has your six!

This is one reason why Christians must not take the Church — the Body of Christ — for granted! Consider Hebrews 10:24-25:

And let us consider how to stir up one another to love and good works, not neglecting to meet together, as is the habit of some, but encouraging one another, and all the more as you see the Day drawing near.

The church is not perfect, but neither are you! We are a family of imperfect people striving to follow the only perfect being. So, I encourage all Christ-followers to find a good bible-based, Christ-honoring, evangelical Church (click here for 28 reasons why you should join the Church). Join the Rebellion and RESIST the evil empire of this world.

Emperor Palpatine wanted Rey to “strike him down” in hateful anger so that his evil spirit, currently residing in a decrepit physical body, could possess her hate-filled and physically fit body (the substance dualism in Star Wars is awesome)! However, Rey chose to resist evil. Yes, Rey did destroy her wicked grandfather, but she did not do so by “striking him down.” Rey defeated evil simply by placing “the Cross” in between her and evil.

You read that right: Rey used the lightsabers of Luke and Leia to form a cross (okay perhaps this is a stretch) which shielded her from Palpatine’s dark powers and turned them back upon the Emperor. She simply resisted evil.

Submit yourselves therefore to God. Resist the devil, and he will flee from you.

5- The Rise of The People

The Rise of Skywalker could have actually been subtitled, “The Rise of the People!” This was a brilliant move by Abrams! The official “military” of the Rebellion was about to be defeated by the rise of the Emperor’s new Empire. Just as all hope seemed to be lost, “We the People” — and heavily armed people at that — rose up to fight along with the good guys and saved the day!

Think about this: if the government would have disarmed “the people,” then the Dark Side would have been victorious (let’s hear it for the Second Amendment)!

The Bible teaches “average, ordinary, and everyday” Christians to be armed with both physical weapons: “But now let the one who has a moneybag take it, and likewise a knapsack. And let the one who has no sword sell his cloak and buy one” (Luke 22:36), and — more importantly — spiritual weapons: “Therefore put on the full armor of God, so that when the day of evil comes, you may be able to stand your ground” (Eph 6:13).

Evil comes in many forms. In the former passage, Jesus is discussing weapons for self-defense purposes in the physical world. In the latter, Paul is specifically discussing a preparation for war with Satan. The salient point not to be missed is that evil exists, Satan can attack you directly or indirectly via another human, and Satan hates you along with the Bride of Christ (the Church). We the People must not only be prepared to stand against evil, but we must also be aware of the tactics employed by those who wish to inflict harm upon God’s children.

“The People” defended the Star Wars universe because they were “prepared for war.” Christians are called to do the same.

JJ Abrams was able to overcome the mistakes made in The Last Jedi. He was left with a mess, but the Force was strong with him and he cleaned things up nicely.   The Force is strong with the Rise of Skywalker. It reminded all of us who grew  up looking to Luke Skywalker as a hero, exactly why we love Star Wars. This movie finished where the Star Wars saga began. 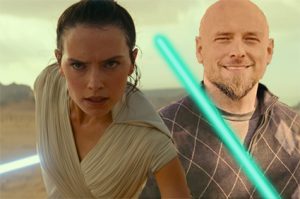 and raised Jesus from the dead) Be With You!

Tagged with: Rise of Skywalker • Star Wars • The Force